The Animation Showcase is the new streaming service made exclusively for the animation industry. This dedicated platform shows work from studios big and small, from industry giants to up-and-coming independents. Participating film-makers can expect an engaged audience of animators, artists and studios, as well as directors and producers from the motion picture and creative industries. The Animation Showcase is the brainchild of Benoit Berthe Siward, who hopes that his... END_OF_DOCUMENT_TOKEN_TO_BE_REPLACED 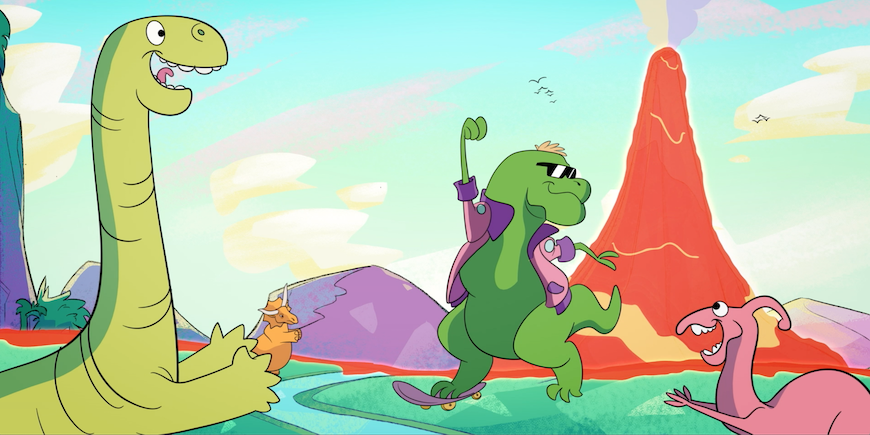 The clothes were brighter, the hair was bigger, the animation was bolder — the Prehistoric 80s must have been an incredible time to be alive, and an even better time to go extinct. At least that’s what Action Dinosaur would lead us to believe.

Written and directed by Jason Merrin (Sleepwalkers), Action Dinosaur is a throwback —like waaaay back— animated comedy following the titular T-rex as he time travels, plays the electric guitar and does some extreme skateboarding. Everything you’d expect from the Prehistoric 80s, right?

Animated using Toon Boom Harmony, Action Dinosaur evolved from a Kickstarter launched in February 2018 that raised $23,000 thanks to 228 backers. Merrin and his team planned an entire series, with the pilot having premiered on December 8 in honour of Pretend to be a Time Traveler Day. It stars comedian Kyle Kinane, best known for appearing in Drunk History and Loose in Chicago, as Action Dinosaur.

Watch the animated pilot for Action Dinosaur above and read our interview with writer and director Jason Merrin below for his 80s inspiration, Kickstarter tips and why he decided to produce the pilot with Toon Boom Harmony. 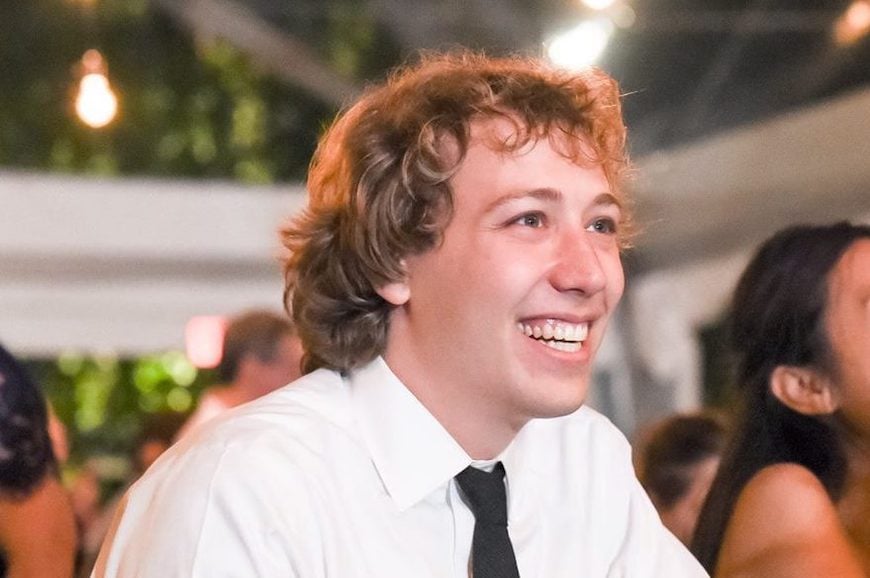 We love Action Dinosaur’s concept. What specific 80s films inspired it?
The inspiration came from a mix of late 80s and early 90s media; Back to the Future, Robocop, Jurassic Park, the Rambo films and pretty much any action movie that starred Arnold Schwarzenegger or Kurt Russell were all major influences. But more than the movies, Action Dinosaur was inspired by the cartoons of the era. A lot of those movies I just mentioned had an animated Saturday morning cartoon adaptation despite most of them being rated R and way too violent for kids.

Trying to squeeze an adult action movie into a colourful kids’ cartoon resulted in some pretty weird shows. Teenage Mutant Ninja Turtles, Biker Mice from Mars, Street Sharks, even The Mighty Ducks animated series — all shows about things that shouldn’t talk having muscles and fighting crime. Cartoons in that era were super weird, and weird is awesome!

How did you get Kyle Kinane involved?
I’ve been a huge fan of Kyle’s for years; I love stand-up and I’ve listened to each of his comedy albums multiple times. In addition to being incredibly funny, he just has the most amazing voice for animation — it’s got this deep raspiness that you can’t fake. So, when my producer Rachel Liu asked me to make a list of anyone I could imagine playing Action Dinosaur, Kyle was at the top. From there, Rachel reached out to Kyle’s team with the script and —lucky for us— he wanted to do it. We never contacted another actor. 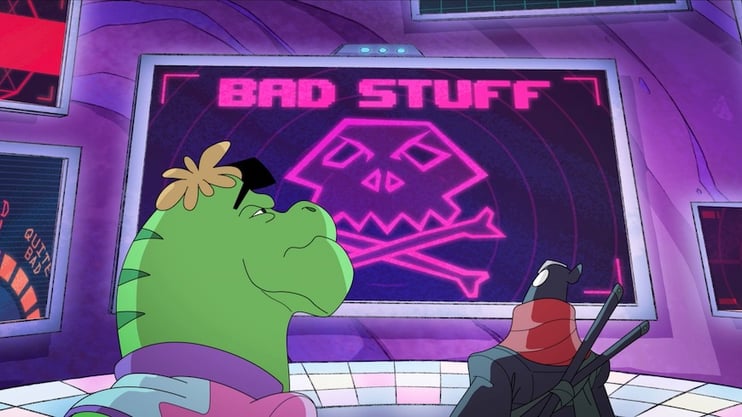 And why did you decide to fund Action Dinosaur with a Kickstarter?
Working within the studio system gives you a lot of support, a big team to count on and the ability to not worry about financing, but it can also be very slow as you have to convince a large corporate entity to take a tremendous risk on you. Even then, there’s every chance they might get scared and pull the plug. I’ve worked within the studio system before and it can be very rewarding, but you can also walk away after years of work with nothing to show for it. We figured if we fund this using Kickstarter and go straight to our audience, we can get to work quicker and at least guarantee that we’ll have something people can watch when we’re done.

Well, congrats on funding the project! Any tips for other animators hoping to learn from your success?
Build as much of an audience for your project before you launch as you can and hire people who bring their own audience, too. Casting is a great place to do that, Kyle’s fans were so helpful in getting our project funded. There are a lot of talented animators and character designers out there who have their own followings, and if they’re involved in your project their fans might support you too.

There are also other ways of building your audience. We set up a Twitter account for the Action Dinosaur character (@akshundinosaur) and tweeted jokes in his voice for over a year before we let anyone know we were making a cartoon. By that point, we’d built a small fanbase of just over 5,000 followers. Many of those people ended up supporting the short film, too. 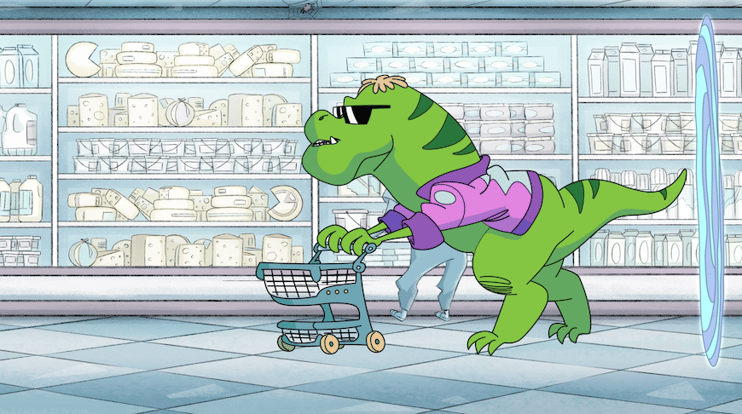 How long did it take you to produce Action Dinosaur in the end?
We worked on Action Dinosaur for about three years, on and off, which is crazy because I wrote the first draft of the script in less than half an hour. Finding the right team, the right look for the show, raising the money and then actually executing —especially with the small size of our team— took time. We already had a full animatic by the time we went to Kickstarter, so the actual animation process probably took about eight months.

Hà Huy Hoàng, who also works under the name Splendidriver, was our absolutely incredible character designer and keyframe animator. We were fortunate to find him through his designs on DeviantArt and he contributed so much to the shape and feel of the cartoon. Action Dinosaur ended up being a pretty international production: Hà has worked in the US, but is mainly based in Vietnam; our background painter Pauline Maltseva is in Russia; we hired Royal Animation Studio, a production house based in India; an American animator named Nate Kawachi did the line cleanup and inbetweens; colour was done in Uruguay by Gustavo Wenzel and I did the compositing myself in Los Angeles.

Why did you decide to do Action Dinosaur in 2D animation using Toon Boom?
Since Action Dinosaur was meant to be my take on 80s/90s cartoons, it was extremely important to me that it feel hand-drawn. Unfortunately, that style has fallen out of favour —particularly in the United States— which is one reason why we ended up building such an international team.

It was Hà’s choice to use Toon Boom Harmony. He says it’s always been his go-to animation software and as a traditionally trained animator it helps him save a lot of time. The user interface is very intuitive and a lot of times he can manipulate his own drawing lines and repeat them instead of redrawing everything every frame. He also likes that it’s vector-based and can scale more readily. Ultimately, he said Toon Boom lets him animate almost as if he was doing it on paper and that’s the feel we needed for this project.

Were there any features in particular that helped during production?
On a logistical level, the ability to do every part of the animation pipeline within Toon Boom and the ease of transferring those files digitally was critical. Because we had people working remotely all over the world, I was constantly receiving Toon Boom files from one person, reviewing them and then passing them on to the next person down the pipeline. The workflow from keys to inbetweens to colour and compositing was smooth and easy, even though none of the animators ever met each other or were even in the same time zone.

For Hà, he says one of the Harmony features he likes most is the ability to key still images to make them move, which gives the feeling of old-school, Hanna Barbera-style limited animation. This project was meant to evoke an older style of cartoons, so this was really helpful.

How and where do you want to see Action Dinosaur evolve?
The dream for Action Dinosaur has always been to turn it into a series. The great thing about this absurdist radical 80s world is that there are no rules, so there are no limits to what kinds of stories we could tell. We’ve already written a handful of them. Ideally we would love to partner with a network or a streaming service to make a full season, but we’re also open to continuing to make one short at a time. I think it will all depend on how this first instalment is received and whether people want more.