Joshua Pinker is a 2D animation artist, originally from New Jersey. He graduated from Lesley University in 2014. Since then he has contributed as an animator on numerous projects with studios across Canada and the United States. In his spare time Joshua self-published and released an e-book, Your Animated Journey, which is a self-help guide for artists interested in working in the animation industry. END_OF_DOCUMENT_TOKEN_TO_BE_REPLACED

Tags: Harmony How To Artist Profile

To showcase all of the features in Toon Boom Harmony 20, we invited seven artists and teams to produce a demo video, each contributing scenes inspired by a short prompt. These teams were drawn from both the Toon Boom Ambassador Program and our international community, and were given total creative freedom on their scenes.

Anja Shu is a 2D animator from Kyiv, who has contributed to a number of animated feature films, shorts, series, commercials and games — and was selected to be a Toon Boom Ambassador for 2020. The aesthetic style of her frame-by-frame animation is directly inspired by traditional art materials. We interviewed Anja about the scene she contributed to the demo pack for Harmony 20 as well as her advice for experimenting with textures and watercolour effects in animation. The whole project is about discovering creative sides of personality. My line was, “You can sing, you can dance,” and I had this idea of an opera singer character being creative both at work and at home.

I wanted these two sides to be contrasting, so at work our character is wearing an elegant dress, a wig and red lipstick. She’s on stage, her gestures are wide and she’s putting her heart into the signing. The background is in warm tones, there’s gold and candles around. When she’s at home, everything is all the way around — she’s wearing simple clothes, no make-up or updo, the background is in cool tones and candles turn into simple electric lights. But she’s not losing her creativity and she’s doing a dance in front of the mirror.

We noticed that every element in the transition between the opera and the singer’s home moves. What did that process of planning out this transition look like?

I think of the background as a live character as well. Backgrounds should always serve the story and the actions of characters in the scene. So I carefully plan the transition — I have the lines and the colors move separately, warm candle lights turn into cool electric lights, and the chandelier on the ceiling becomes a simple lamp. But I also wanted some elements to stay the same and unite the two contrasting settings, like the roses that fall on stage later come together in a vase.

Also the curtains — at first it’s a red stage curtain and later it’s a curtain on the window. 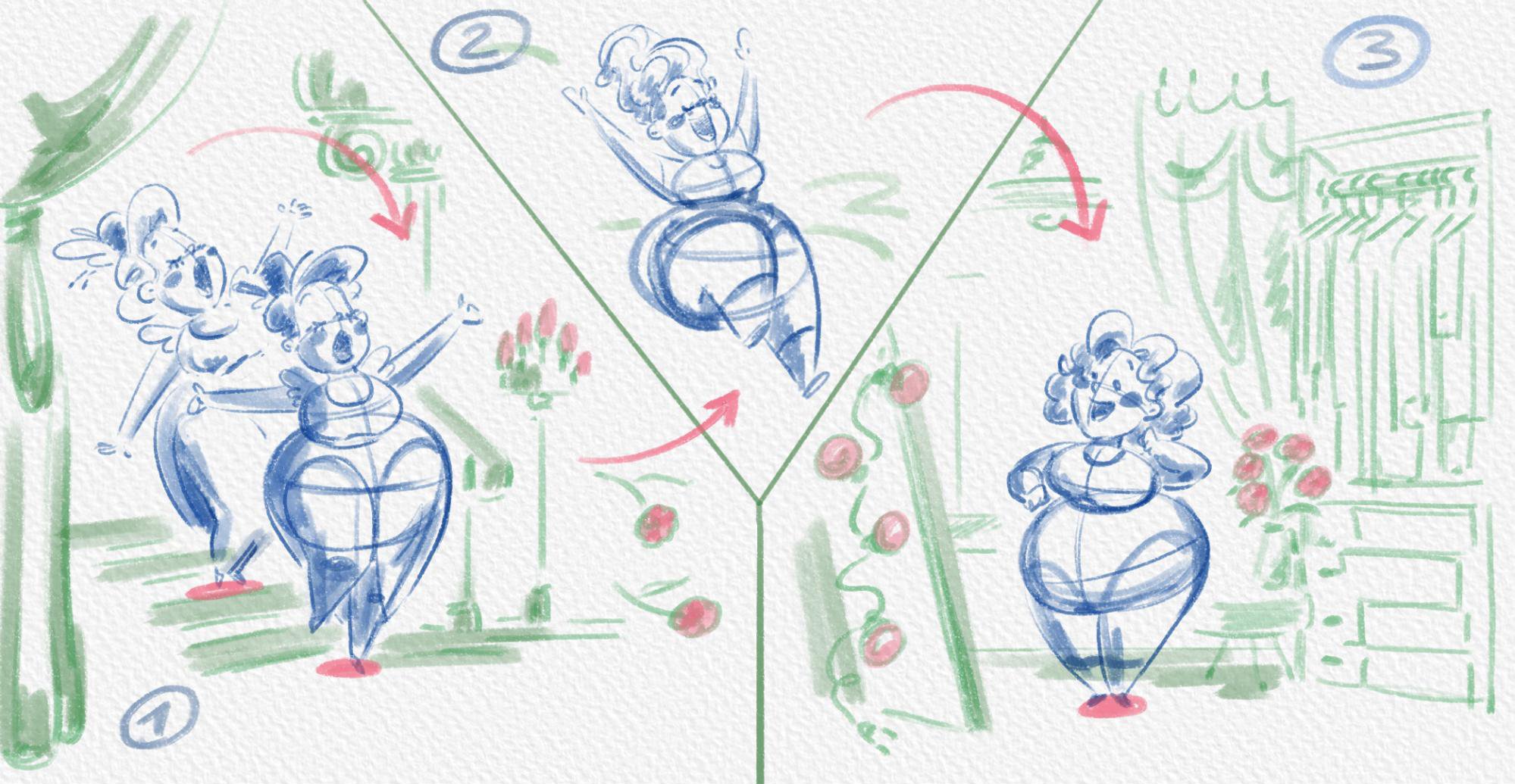 Layout Image for You Can Sing from the Harmony 20 demo video by Anja Shu.

What was the most technically or artistically challenging element of your scene? What are you most proud of?

I believe that little details are very important, even though sometimes we may not notice them in the scene. In this project, I’ve spent a lot of time on glowing candles and little reflected lights dancing on the singer's face and clothes.

I used the overlay blending mode and a glow effect node, and I’m very happy with how it turned out.

We enjoy your visual style and design sense. What are some sources that you draw inspiration from in your work?

I’m very happy with a wide range of textured brushes and pencils that Harmony has to offer. There are so many styles to try — including watercolor, pastel and chalk.

Also the compositing tools: I could find all the effects I needed for the project within Harmony, and it’s convenient because you can see the final result right away in the render view. 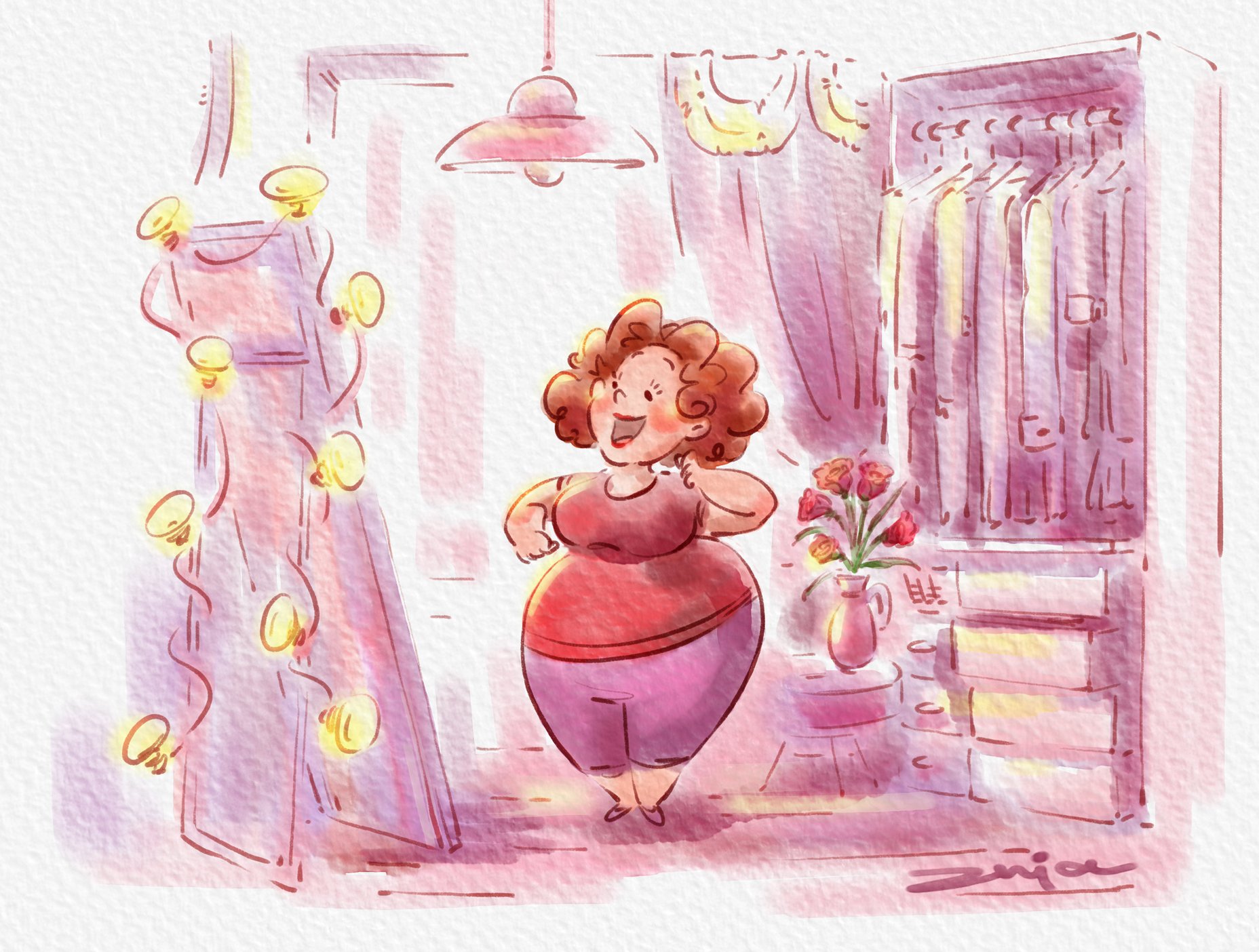 Concept art for You Can Sing from the Harmony 20 demo video by Anja Shu.

How did this sequence compare in scope with other projects that you have worked on in the past?

Here I was given complete creative freedom and I was very happy about it.

I came up with an idea and a character and had a wide range of tools to fulfill my vision in this project. I had a lot of fun and I was so happy to meet the other artists and learn about their amazing work.

Was there anything about this project that surprised you?

Concept art for You Can Sing from the Harmony 20 demo video by Anja Shu.

Do you have advice for artists who want to experiment with textures in their animation?

First, draw some concept art to get a clear vision of what you’re going for.

Prepare your texture files. They can be painted digitally or hand crafted on canvas or paper. You can import your texture into your project and experiment with blending modes, or you can replace any color in the project with a texture file using color override node. The texture file can be animated as well by using the transform tool.

You can try various brushes and pencils of your preference, whether it’s watercolor, pastel, charcoal or a mixed style of everything.

Interested in seeing more from Anja Shu? You can find Anja’s work on her website, Instagram and Behance. If you have more questions about this scene, be sure to join us on Thursday, July 9 at 4PM EDT for a live discussion with Anja Shu on Toon Boom's Twitch Channel.