Top Animation News is a weekly column that rounds up the biggest, best and breaking stories from the animation industry. This edition covers January 17 to 24, 2020. END_OF_DOCUMENT_TOKEN_TO_BE_REPLACED

Meet the story artists behind the WoW factor at Blizzard Entertainment

Blizzard Entertainment took the gaming world by storm in the 1990s, plugging a cohort of first-time PC owners into worlds of orcs, demons and battles on faraway planets. Over two decades later, the California-based company remains on top. Its franchises Warcraft (and the associated MMORPG, World of Warcraft), StarCraft, Diablo and Overwatch are still globally popular, from everyday players to esports tournaments to the evolving realm of mobile gaming.

In the age of social media and Comic-Con trailers, one way Blizzard has kept excitement high is through cinematics that add weight to the narrative and lore in their games. These short animated video sequences are beloved amongst fans and have become essential as both plot drivers and promotional tools. They also happen to be visually stunning, with the gaming company having submitted its Diablo II cinematics to the Academy Awards in 2000.

Whether in-game or on YouTube, these Blizzard cinematics bring players’ favourite heroes and villains to life through CGI. As with any animation, step one is planning scenes — and for that, Blizzard’s storyboarding team turns to Toon Boom Storyboard Pro.

Part of the Story and Franchise Development department, Blizzard’s storyboarding team’s six members include Shannon Eric Denton, Mike Koizumi, Sung Shin, Ae Ri Yoon, Chap Yaep and Ted Boonthakit. They began using Storyboard Pro in 2019. While the artists can’t offer too many spoilers on what they’re currently working on, they have already used the industry-standard preproduction and animatics software for World of Warcraft and Overwatch cinematics.

Toon Boom caught up with Blizzard Entertainment’s storyboarding team to learn more about their creative process, what it’s like being a story artist at a video game producer and to understand how our technology helps bring their magic to life.

Inside the storyboarder’s studio: Blizzard Entertainment

Hi guys! Can you tell us how being a story artist for a video game company differs from working in a studio?

SHANNON: We work across multiple IPs and normally at a studio you’re working one film or television series at a time.

TED: I come from live-action background where storyboards are done strictly off of predetermined shot lists. The scripts are often broken down either by the directors alone or in concert with the ADs. At Blizzard, we work very closely and fluidly with the directors and often the writers as well. Deadlines are also fluid, as changes occur frequently, dependent on the needs of the game team. Board artists must get used to doing many iterations.

Could you walk us through an average day as a story artist at Blizzard?

MIKE: There may be a meeting or two to check in with our director and the other collaborators of the project we’re on. We show work to each other often for feedback. Most of our time is spent storyboarding. Once the boards are in good shape, we will go to editorial to look at the animatic with the project team, discuss ideas, get notes and go back to storyboarding. We keep doing that process until the animatic is the best it can be!

TED: All of the above, until we get the green light on a project. 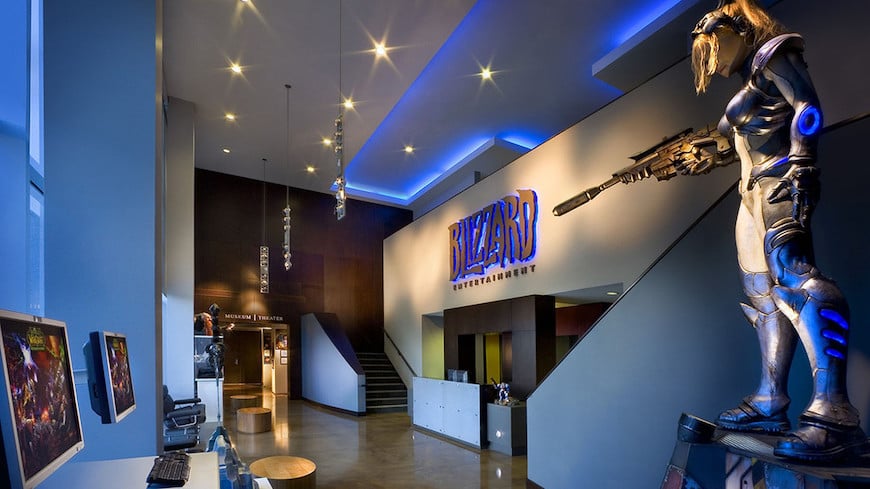 Your studio is known for bringing the worlds of Warcraft, Diablo, StarCraft and Overwatch to life. What other departments and creatives do you consult with in order to get your characters just right?

MIKE: A team that we often consult with is our super awesome Lore Team. They know all the histories of our worlds, the characters and events. Chatting with them gives us a lot of context to help us understand characters, what they’ve been through, how they think, and how they might act in certain situations.

When it comes to Blizzard’s cinematics, what inspires the team to produce such stunning visuals?

CHAP: Great ideas stem from a lot of collaboration across the board.

MIKE: For me personally, part of it is to carry on the tradition of Blizzard cinematics. I remember when I was in college and saw the cinematics for StarCraft and how they blew me away. Now that I work at Blizzard, I want to create the same kind of memorable story experiences for our players.

TED: The Blizzard story team draws on many sources for inspiration: movies, comics, paintings, virtually anything and everything that sparks strong emotions, drives compelling stories and shapes fantastic characters. We have many rounds of ‘creative/story jam’ sessions, where other directors and producers get their eyes on each project, in a highly collaborative setting.

SHANNON: [I’m inspired by] the storyboard artists I get to work with here at Blizzard along with everyone else we’re lucky enough to work with in our Story and Franchise Development team. Our incredible co-workers inspire our creative process more than anything. 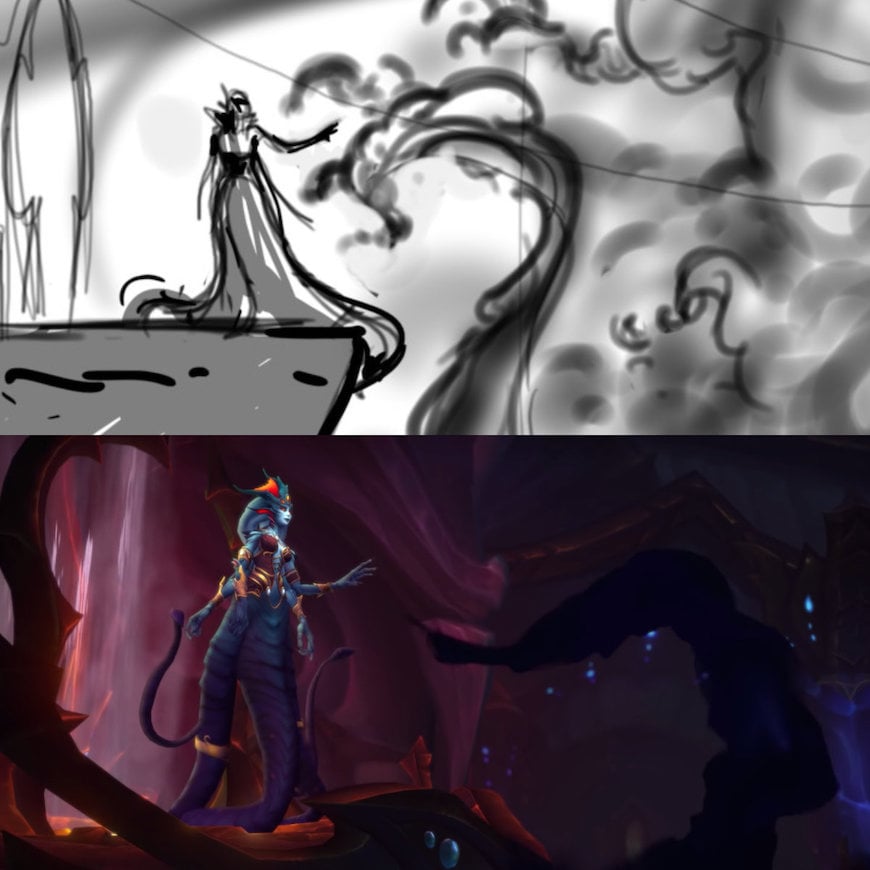 On average, how long does the preproduction take for each cinematic?

CHAP: The time is very fluid — [it’s] until the final product is just right. The end result is worth the effort.

MIKE: Our in-game cutscenes are usually faster paced and we may be storyboarding for a few weeks. For our longer cinematics, we will storyboard for a few months or longer.

TED: I’m quite new to Storyboard Pro, so I’m still in the learning stage. I must say, so far, it’s been fun and intuitive.

When you started using Storyboard Pro, what did you expect to see?

AE RI: I didn’t know much of what to expect, but I was surprised by how much I learned to enjoy drawing in vector format. There were many things that made me appreciate how much easier boarding felt when working in Storyboard Pro.

CHAP: I was just happy I didn’t have to handwrite scene descriptions anymore.

What was the learning process like with Storyboard Pro?

CHAP: YouTube and coworkers really helped with learning how to use Storyboard Pro.

MIKE: A lot of my teammates and friends use Storyboard Pro, so I asked them first whenever I had questions. I also found the video tutorials on the Toon Boom website very helpful when I needed to learn something specific. 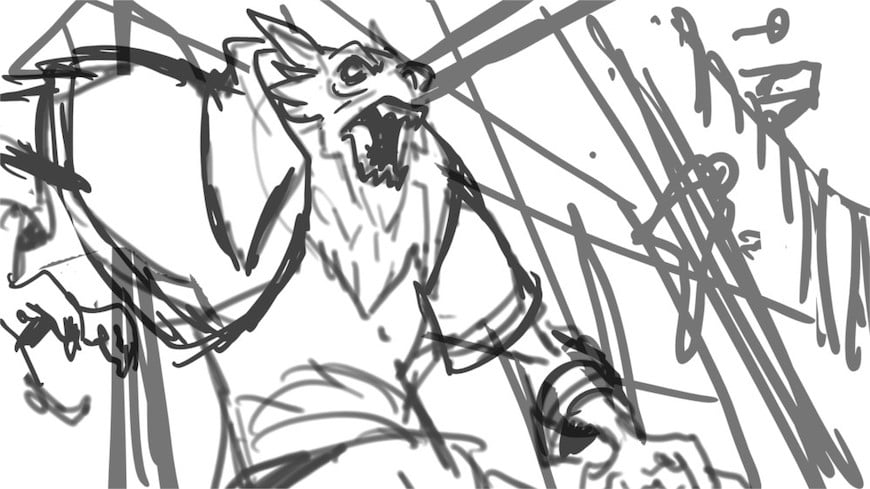 What advice do you have for new graduates who want to make story art for a video game studio such as Blizzard?

SUNG: I believe that since you have to work on a variety of projects with diverse styles, it’s good to be versatile. Try to achieve good drawing skills and storytelling skills. Well-designed animation and a background in comic books help. Good luck!

CHAP: Work hard, be humble and willing to learn… and what Ae Ri said: always be interested in stories.

MIKE: To add to what the others have said: develop a simple drawing style that communicates — character emotions, gesture, staging, mood and action choreography. Tell stories with your drawings and make your audience feel something. You also need to be able to collaborate with other artists, share your ideas, and give and receive feedback well. It’s a team effort.

TED: Watch lots and lots and lots of movies — good and bad ones. Take film classes, talks and seminars. Play some games. Become obsessed with storytelling. Draw, doodle, sketch. Hang around with other storyboard artists (preferably ones who are better than you) and learn from them.