Top Animation News is a weekly column that rounds up the biggest, best and breaking stories from the animation industry. This edition covers January 17 to 24, 2020. END_OF_DOCUMENT_TOKEN_TO_BE_REPLACED

The holidays have been described as the most wonderful time of the year, full of heartwarming moments and cheer — that is, unless you hate your partner’s family. This unfortunate festive phenomena is the theme of British band Scouting for Girl’s latest Christmas single “Let’s Not Go Away,” which premieres today on YouTube at 13:00 BST. London-based studio Blue Zoo animated the song’s music video in Toon Boom Harmony, bringing this uncomfortable reality to life with humour and heart.

The “Let’s Not Go Away” music video was envisioned by Blue Zoo’s Recruitment and Talent Coordinator, Katie Gascoyne, who made her directorial debut with the piece. This was the 12th edition of the studio’s annual BAFTA-nominated Christmas shorts program, though it will be the first to be led by a member of the human resources team and its inaugural video in the series produced in a 2D Harmony pipeline.

"Let’s Not Go Away": The gift that keeps on giving

Blue Zoo connected to Scouting For Girls via their mutual collaborator, animation writer David Freedman, who co-wrote “Let’s Not Go Away” with his son Jackson. The studio’s Christmas shorts program encourages employees from all departments to submit their pitches anonymously, with the person behind the selected concept getting to direct it.

Using the song’s lyrics as a brief, Gascoyne envisioned a holiday-themed love story where a living gingerbread man becomes tired of his human girlfriend’s relatives treating him less like a member of the family and more like a meal.

Gascoyne tells us, “I wanted it to be really Christmassy and felt like the gingerbread man symbolized the season without being overdone. Being already human-shaped allowed for him to be part of the relationship and makes it easier to empathize with him.” 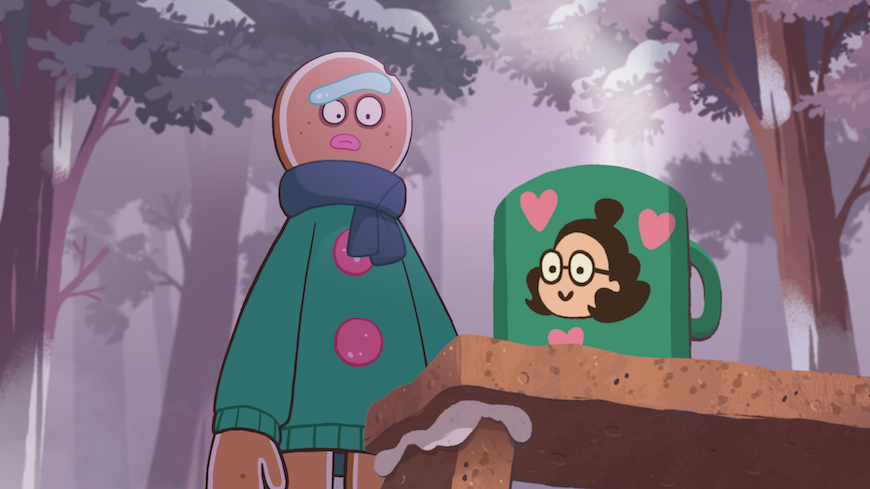 The results were as sweet as the gingerbread man’s gumdrop buttons — both as a finished product and for Gascoyne as a creator. Having gone straight from her MA in 3D Computer Animation to her recruitment role at Blue Zoo, the Christmas short offered her the gift of directing experience. Attracted by its high quality of work and inclusive culture, she had wanted to work at the studio for years and was hired after passing through its AnimDojo online training program.

Her outgoing personality and education in 3D animation made her perfect as Blue Zoo’s talent person. Soon after being hired herself, she recruited most of the studio’s brand-new 2D department, which launched earlier this year and is currently working on the first season of Ant Blades’ 20 x 30-minute episode children’s series Pony for Nickelodeon (set for release in 2020). 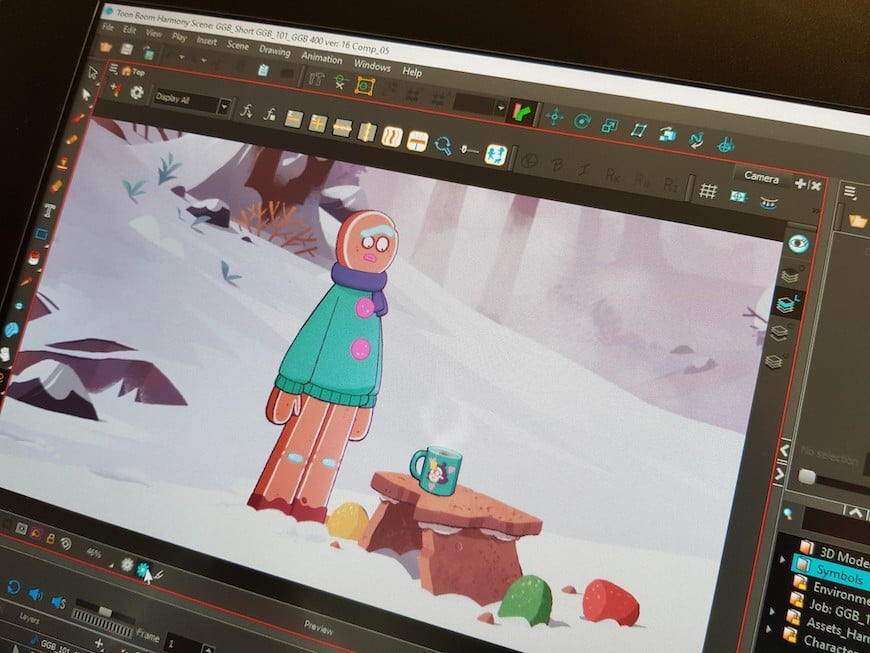 Given that “Let’s Not Go Away” is aimed at older audiences, Gascoyne wanted the music video to be 2D too. She explains, “With 3D animation, if you try to go older it’s a lot more difficult. If you think about the adult animated TV shows, they’re all in 2D like Rick and Morty, Bob’s Burgers and Family Guy.”

She continues, “I think with 2D animation, it’s a lot easier to get a more sarcastic, comedic look and drive that level of comedy that’s more mature.” 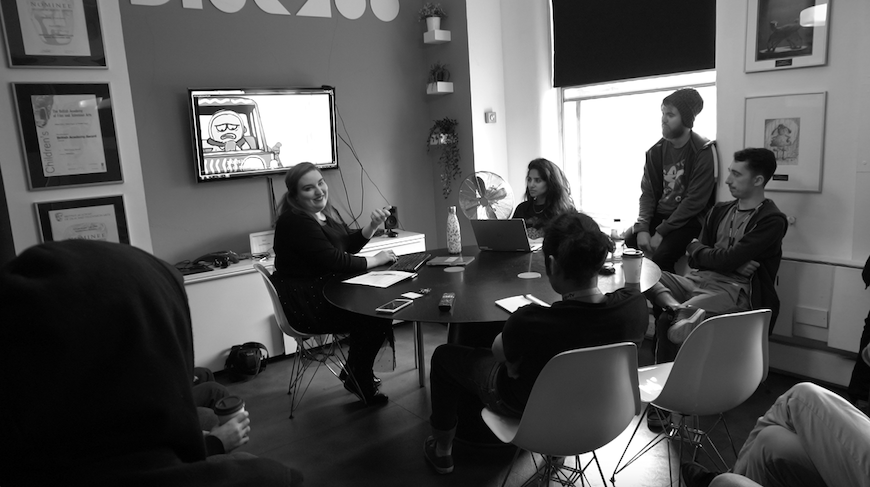 From tune to toon

Having recruited most of the artists for Pony, Gascoyne was already very familiar with Blue Zoo’s 2D animation team and wanted to show the world how talented they are. This made it easier for her to be extremely involved in the production process; she designed the characters, oversaw each stage and approved everything alongside art director Jacques Gauthier— from planning in Toon Boom Storyboard Pro through to animation and compositing in Harmony.

“Being respected in this role was really rewarding. I also loved how much I learned about the 2D process doing this,” says Gascoyne.

She continues, “The amount of effort the artists put in and the high quality that came out was absolutely amazing. It was extremely rewarding to see how much people wanted to really make this come to life in the best way they could in the time that we had.” 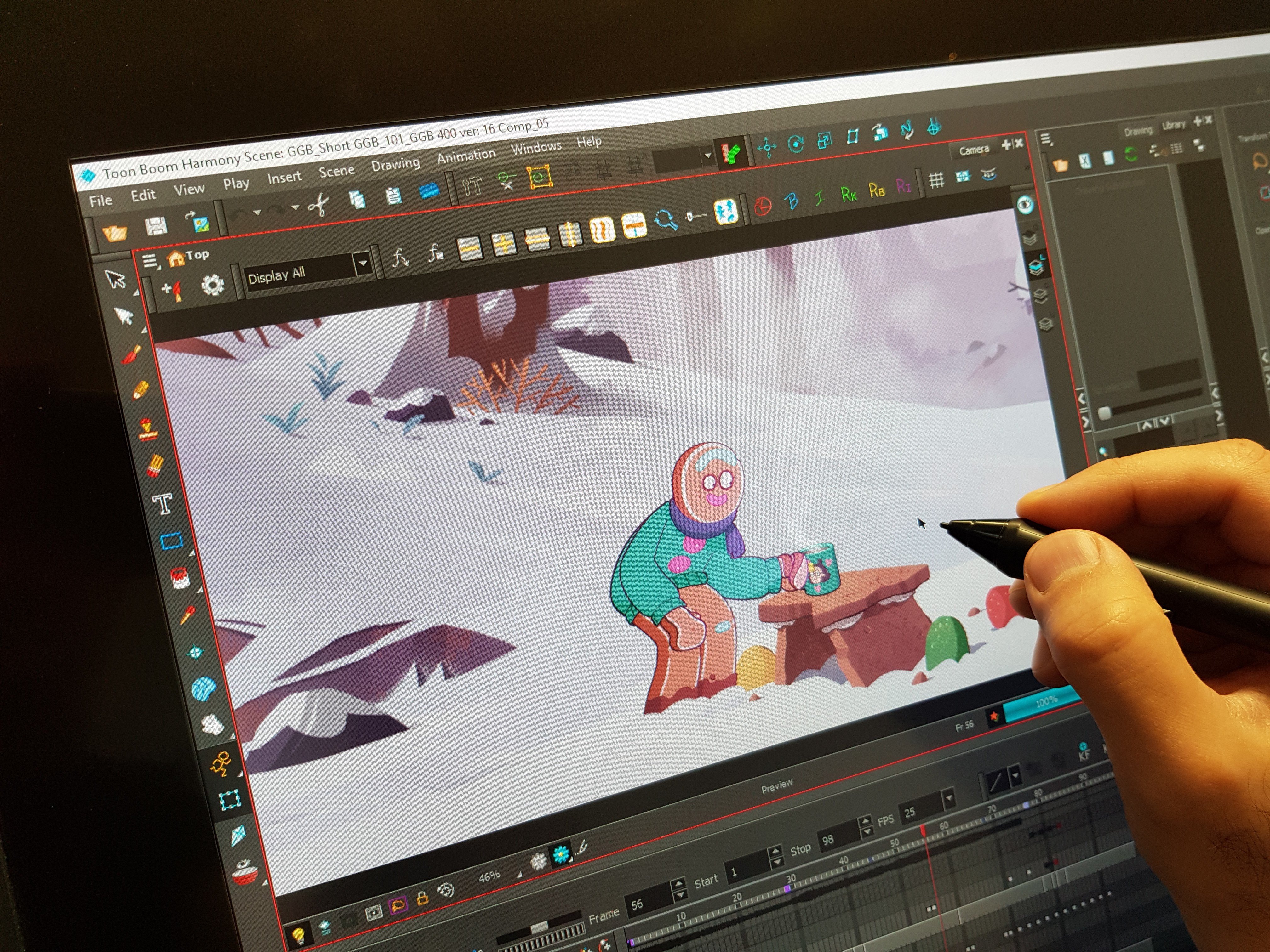 Production was on a tight timeline, beginning in September and running for nine weeks until the end of November. While normally the Blue Zoo Christmas shorts are produced by artists split across multiple 3D teams, the studio only has one 2D group — who often found themselves working over their lunches, in the evenings and on weekends. Fortunately, using efficient software like Toon Boom Harmony kept production moving along quickly.

Recalling a moment where she needed to make a last-minute edit in Harmony, Gascoyne says, “We wanted [the gingerbread man’s] head to look a little rougher when it falls off onto the ground, before it was a smooth shape and wasn’t really selling it. Our artists could add to the rig through the various nodes and were able to draw through the layers and attach them to controls.”

In the end, the results were exactly what she and Scouting for Girls asked for. As a final thought on bringing her vision for “Let’s Not Go Away” to life, Gascoyne says, “I really appreciate that I genuinely had the opportunity to direct [the music video] — people listened to my opinions and accepted them. If I asked someone to redo something because it didn’t fit with the vibe, people would. It was a constant conversation where they trusted me to have the knowledge to make something better, which as a first time director was really great.”

"Let’s Not Go Away" is a Sony Music release and is available to stream everywhere. Feeling festive? Give yourself the gift of a Toon Boom Harmony 21-day free trial now!