The Animation Showcase is the new streaming service made exclusively for the animation industry. This dedicated platform shows work from studios big and small, from industry giants to up-and-coming independents. Participating film-makers can expect an engaged audience of animators, artists and studios, as well as directors and producers from the motion picture and creative industries. The Animation Showcase is the brainchild of Benoit Berthe Siward, who hopes that his... END_OF_DOCUMENT_TOKEN_TO_BE_REPLACED

To celebrate the launch of Storyboard Pro 20, we commissioned an animatic from Exceptional Minds — a Los Angeles-based nonprofit academy and studio that provides customized instruction in visual effects and animation, as well as hands-on experience, for artists on the autism spectrum. Titled A Space to Create, their crew produced an original script, storyboards and an animatic. The results were out of this world!

The Exceptional Minds Animation Studio, a team of 12 artists, was led by recognized creative director Howie Hoffman and his co-director, veteran animation artist Scott Sackett. The two were joined by in-house producer Jon Clark as well as graduates and artists, including assistant director Jacob Lenard, David Miles and Ryan Oldis, who co-created the story and script. Prior to beginning production on the animatic, the crew had little experience with Storyboard Pro.

“At first, I hated storyboarding. I never liked it because I never had the right tools. Now that I have Storyboard Pro, it’s actually fun,” says Lenard.

Having her guidance was invaluable during this speed-learning period, with Oldis recounting how using the auto-matte tool would end up saving him time during the production of the animatic. Clark recalls how prior to the training, the team would do storyboards on paper that he would scan, zoom in on each frame in video editing software and then assemble the animatics — a time-consuming and painstaking process. 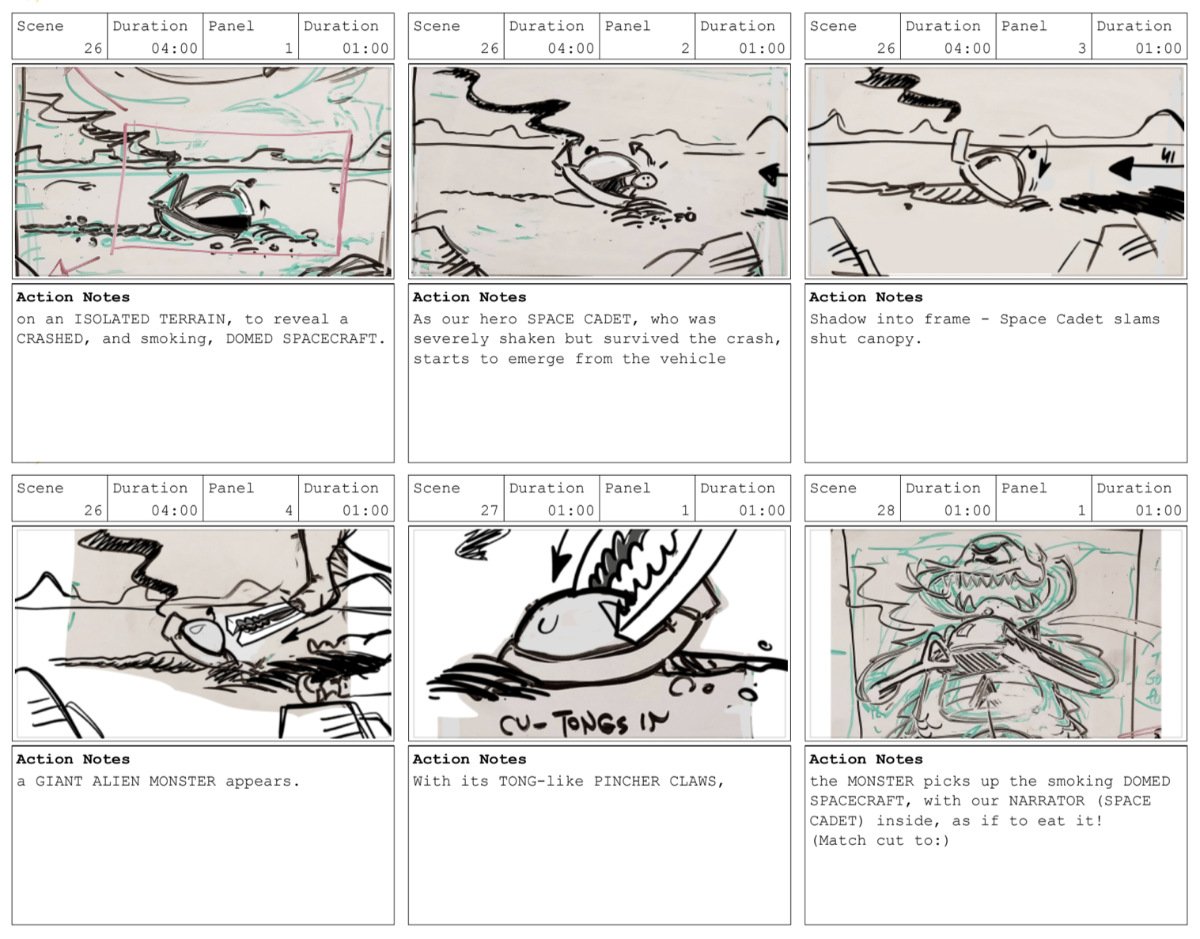 Rough storyboards from Exceptional Minds' A Space to Create animatic.

Sackett notes how Storyboard Pro’s interface made it quicker and easier for him and the team to learn the digital solution — particularly since they are already familiar with video editing and digital illustration as well as animation in Toon Boom Harmony. This is seconded by Oldis, who says, “What I really like about Storyboard Pro is how easy it is to get a handle on everything it has to offer. I feel like it’s very easy to start a new project and have something that looks really good in an hour. All you need is a few drawings and you can create something that looks almost animated.”

After finishing their training, Lenard, Miles and Oldis blasted off into the story and script. It follows an interplanetary adventurer contending with attacks from his Neme-SIS and aliens, visually incorporating Easter eggs spanning Star Wars, Star Trek, Battlestar Galactica and Spaceballs, to name a few.

“There’s a very specific diction and language that they often incorporate into these huge space operas that we tried to use as much as possible,” says Miles. 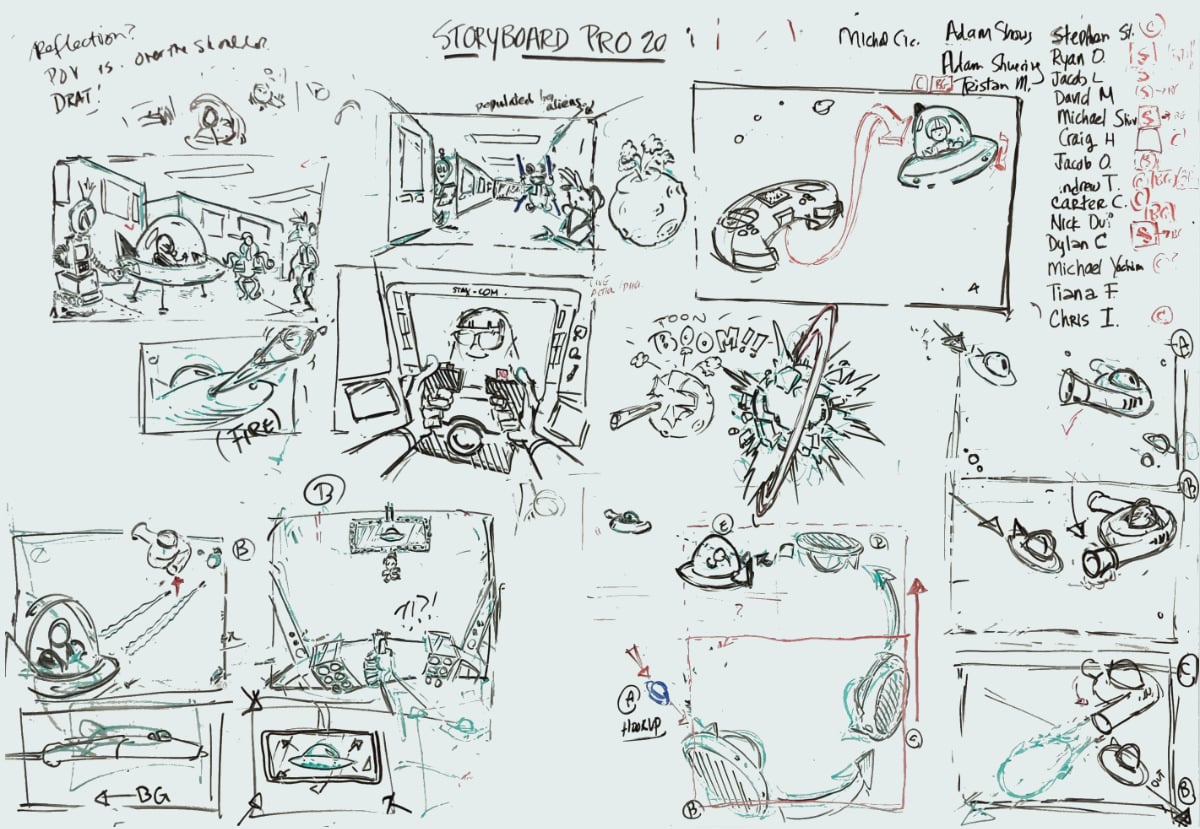 Scan from a whiteboard planning session at Exceptional Minds.

The most direct inspiration came from Spaceman Spiff of Calvin and Hobbes, the space-faring, swashbuckling alter-ego of the titular protagonist. SPOILER: the main character in the demo is also a little boy engaging in imaginary intergalactic warfare. In addition to his numerous other roles on the production, Lenard provides the young hero’s voice while his own father, Dan, plays the dad.

A rising star, Lenard is proof of the impact of Exceptional Minds’ mission. Originally from Buffalo, prior to joining the school and studio he was among the 84% of people with autism who are unemployed — with one in 54 Americans now diagnosed as being on the spectrum, according to the nonprofit’s website. Since graduating from their vocational training program, Lenard has become a content creator who works on personal and professional projects as well having interned at Warner Bros.

“Here at Exceptional Minds, they’ve really nurtured me and I’ve learned how to work along with these different skills for animation. I like it here,” says Lenard.

His experience is echoed by both Miles and Oldis, who were either unsure of what they wanted to do or were unable to find work after college. Now they are forging ahead in their respective creative careers, having both been accepted to intern at Cartoon Network this past summer. 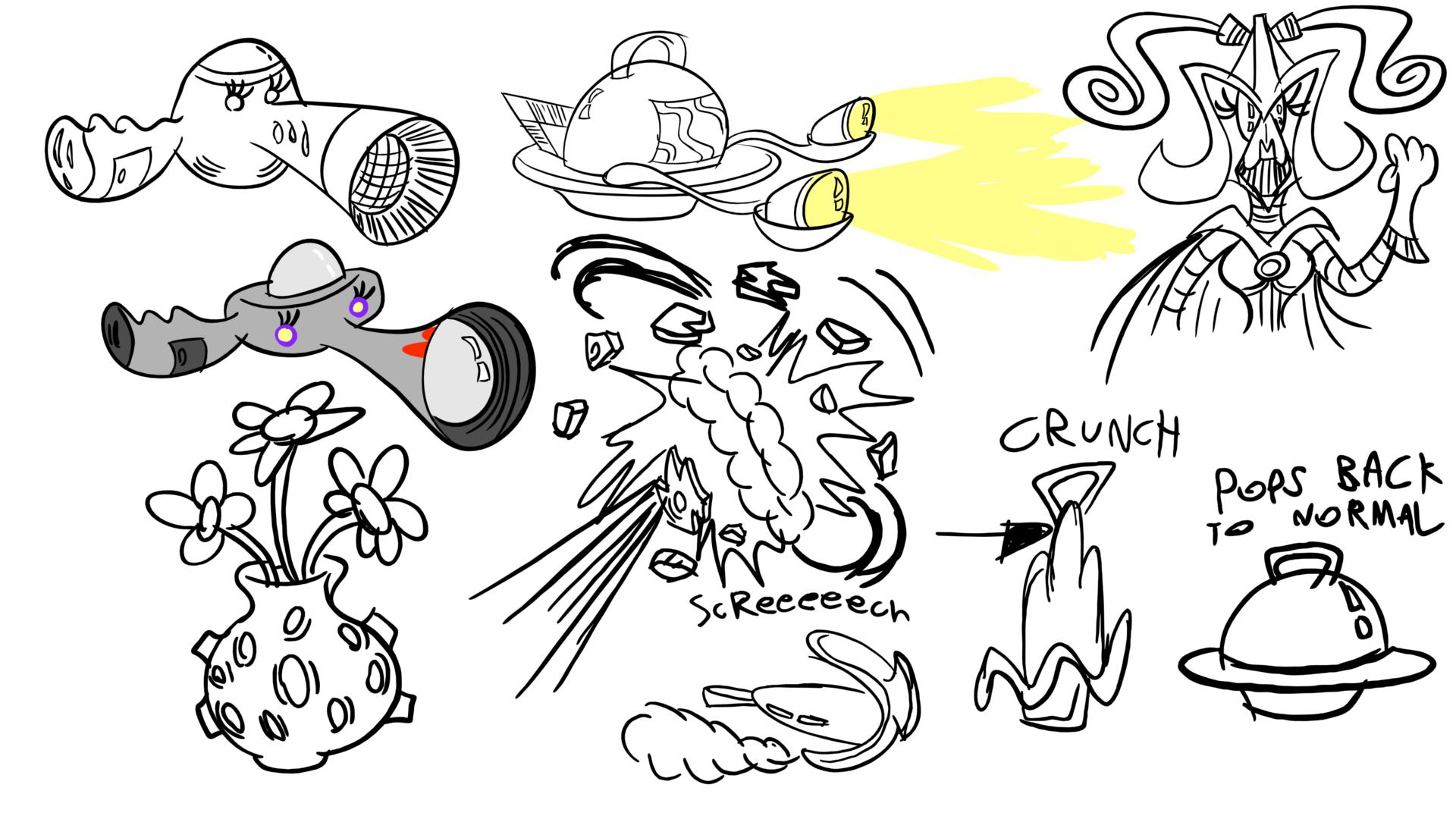 Rough designs from the A Space to Create animatic.

“I always wanted [our graduates] to have a place to work that was more nurturing than the outside, a place they could feel at home. The vision’s a little bit harder with everyone virtual and distant, but it’s still very fulfilling. They’re probably the most talented staff I’ve ever directed; they have their gift-abilities,” says Hoffman.

As assistant director, Lenard and team had creative freedom and fun with Storyboard Pro’s drawing tools and incorporated innumerable blink-and-you’ll-miss-it details — with the interior of Neme-SIS’ hairdryer ship styled as a bedroom vanity with a swing-arm mirror. Inside the protagonist’s craft are Storyboard Pro tool icons, while the space station is shaped like a video game controller. When the two fire shots at each other, they blow up a planet that just happens to look like a vase.

Speaking about the drawing tools, Lenard says, “I like the brushes. In Storyboard Pro, there are so many options. You’ve got smooth or rough or the pen responds to pressure — it feels natural to rough things out in there.”

Part of Sackett’s role involved taking the backgrounds, characters, poses and props from 12 artists and bringing them together as one unified presentation. For instance, some backgrounds were done directly in Storyboard Pro while others were imported from PSDs.

A review session between Howie Hoffman, Karine Charlebois and artists at Exceptional Minds.

He and the team were supported by Charlebois, who served as an expert consultant — virtually meeting with Hoffman and Sackett to go over storyboards, helping with revisions and suggesting improvements. She is currently the storyboard supervisor on F is For Family at Oasis Animation and also teaches storyboarding at Rubika Montreal.

Charlebois says, “Challenging sequences were in my court, and we all gave a big push at the end where I would tweak, fix, time, adjust and punch up the animatic with Howie, Jacob, Scott and Jon directing and commenting — and learning.”

She continues, “It’s especially rewarding to see people's eyes light up when I show them that this thing they expected would be pretty complicated turns out to be really easy to bring to life in Storyboard Pro.”

In total, building assets took about three weeks and then another to combine them. Different parts of the story had separate designs as well, with some being imported CGIs, PNGs and JPEGs; Exceptional Minds artist Andrew Turney did the 3D modelling in the short.

“We learned how to import CG into Storyboard Pro and use it as a reference. We had these complex spaceships and we were sitting there trying to draw them from different angles. It’s a challenge for anyone, so it was really great to have a model, bring it into Storyboard Pro and use it as a base-point reference to draw over. That was a great step one. Step two was having this pure CGI and we were able to have a sequence in there where they stand by themselves. That was a really great asset and a nice tool,” says Sackett. 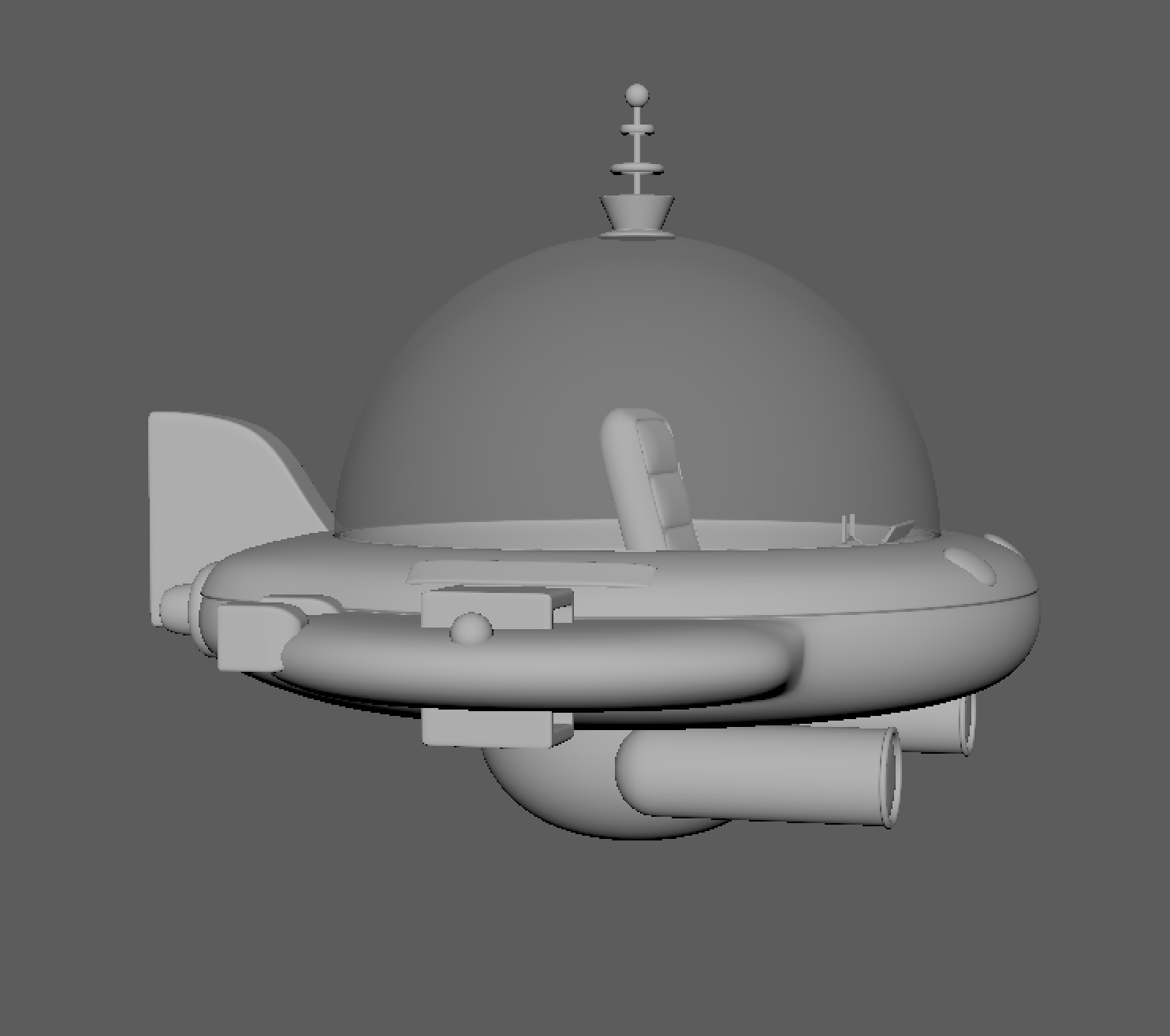 A 3D model used in the Space to Create animatic.

Oldis reinforces this: “Besides the auto-matte, the integration of the 3D is the real standout feature. I think Photoshop has integration with 3D, but it’s kind of confusing how to navigate. Bringing 3D objects into Storyboard Pro is extremely easy and the fact that you can actually move the camera through large objects and have these large 3D environments really makes the animation process a lot easier.”

Since they finished production on the demo, the team has already begun using Storyboard Pro for their own projects — following up their training with Toon Boom’s online learning resources. Miles says, “Storyboard Pro takes what would be a month-long job and shortens it down to a week or two. It allows you to get your content out there quickly and efficiently.”

Moving forward, Hoffman hopes to see this animatic turned into an animation — hopefully in Harmony. He says, “We plan to start using Harmony a lot more, depending on the gig. We’re a fairly mixed-media studio — for 2D, almost everything we do has a different look. I really want to do the Harmony demo pack using this story!”

Given the work he and the Exceptional Minds team have produced using Storyboard Pro, we are sure it would be nothing short of stellar.

Nearly 85 percent of people with autism are unemployed. Over the past decade, the Exceptional Minds school and studio has enabled artists on the spectrum to launch meaningful careers in animation and the digital arts fields. This Giving Tuesday, donate to Exceptional Minds’ scholarship fund and help change the lives of artists like Jacob, David and Ryan. Click here to give to the scholarship fund.