For the launch of Toon Boom Harmony 20, we hired seven artists and teams around the world to participate in a demo video highlighting the features and capabilities of our new animation software. These artists were drawn from both the Toon Boom Ambassador Program and our international community of artists, who were given total creative freedom to construct their scenes. END_OF_DOCUMENT_TOKEN_TO_BE_REPLACED

GKIDS president on Weathering With You and the global anime flood 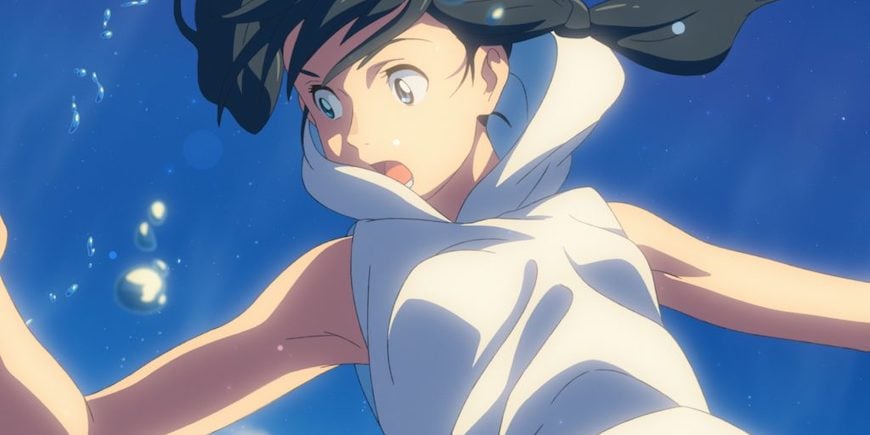 New York-based distributor GKIDS has become a pillar of the toon industry, bridging global animated films and series with North American audiences. Stateside, it is perhaps best known for its events including Studio Ghibli Fest and the Animation Is Film Festival, which kicks off with a screening of Japanese director Makato Shinkai’s Weathering With You anime on October 18 at the TCL Chinese Theatre in Hollywood.

Weathering With You follows a young boy from the Nippon countryside who ventures to Tokyo and befriends an orphan girl who can mysteriously control the weather. It is the spiritual successor to Shinkai’s global blockbuster Your Name, and is already the highest-grossing movie at the Japanese box office for 2019. Both films were planned in Toon Boom Storyboard Pro, which is relied on for storyboarding by productions around the world.

Japanese anime hit a record ¥2.15 trillion ($19.8 billion) revenue in 2017 according to the The Association of Japanese Animations, driven largely by growth in overseas markets. Distributors like GKIDS play an essential role in promoting these films overseas — not only in attracting audiences abroad, but also introducing anime to the festival circuit.

The distributor will give Weathering With You an Oscars-qualifying run before the end of 2019 and the film was selected as Japan’s contender in the Best International Feature Film category at the next Academy Awards, making it the first animated feature to receive the honour in over 20 years.

Toon Boom spoke with GKIDS president David Jesteadt about his thoughts on the Japanese anime industry’s global growth, why Weathering With You is opening the Animation Is Film Festival and whether Makato Shinkai truly is the next Hayao Miyazaki.

Congrats on the Weathering With You premiere at TIFF! What was the audience's response?
DJ: The audience response was fantastic. It was a sold-out premiere, as was the second screening two days later, and you could feel the energy and excitement in the room. There were a lot of fans of Makoto Shinkai’s work. We had been looking at the film by ourselves or in empty screening rooms checking technical specifications for weeks before the big premiere, so I was relieved that everyone was as appreciative and in love with [Weathering With You] as I am.

That’s amazing! What initially attracted you to Makoto Shinkai and Weathering With You?
DJ: I’ve been a fan of Shinkai’s since I saw 5 Centimeters per Second, and remember being blown away by the level of detail in these hand-drawn images. We are used to CG animation pushing the envelope for photo-realism, and it’s what we have come to expect from advances in computer graphics power. But to chase that standard in hand-drawn animation seems insane… there is just a level of craftsmanship that is next-level in his work. I also appreciate how character-focused his stories are, and how he is not afraid of letting scenes play out at their own pace. It really lets you establish a deep emotional connection with the work. 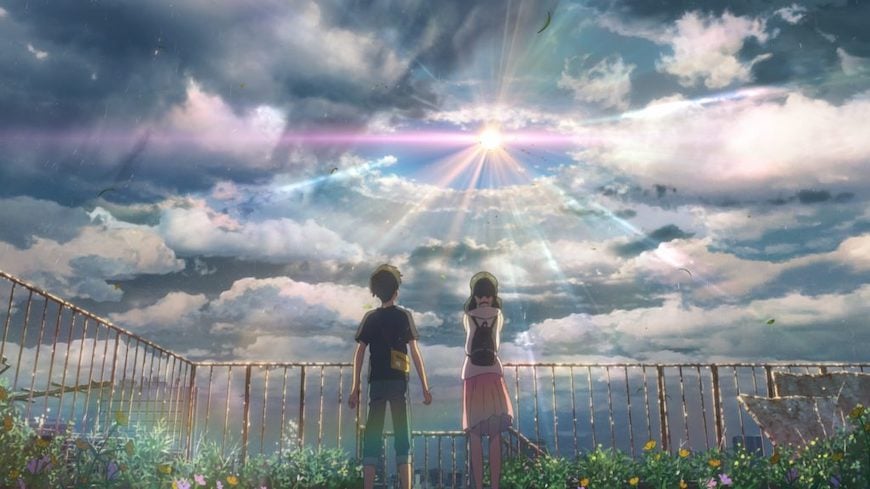 Do you think North American audiences will connect with it?
DJ: I hope that North American audiences will be curious in how Makoto Shinkai follows up such a groundbreaking film like Your Name. I think they’ll be really surprised and pleased by how Weathering With You pays tribute to some of the elements that made Your Name so successful, and also how it refuses to live in its [predecessor’s] shadow. It is a story that is uniquely made for our time, tackling themes of how to establish meaningful emotional connections in a time when all interactions are so mediated and fleeting, the expected sacrifice and burdens placed on the youngest generations to deal with the largest issues of today, and the promise of youth. It is beautiful and inspiring. I hope the audience reaction here will be as strong as it has been in Japan, where it is now the #1 film of the year — and still growing.

Speaking of audiences here, why did you select Weathering With You to open the Animation Is Film Festival?
DJ: The Animation is Film Festival was founded with a simple mission: to expand the definition of animation and how American press, film industry and audiences think about what the medium is capable of. Too often, animated films are dismissed as being “just for kids.” While there are great animated films for families, we launched the festival to show the broadest spectrum of what the medium is capable of — from huge studio blockbusters to tiny indies animated by one person.

Weathering With You is a great opening film as it has clearly left a huge mark on its domestic market, and the animation and storytelling are beyond reproach. This is a film of ambition, of big themes and big ideas, with such an assured execution that shows advances still being made in the actual animation process. It really sums up what we find so exciting about the festival as a whole. 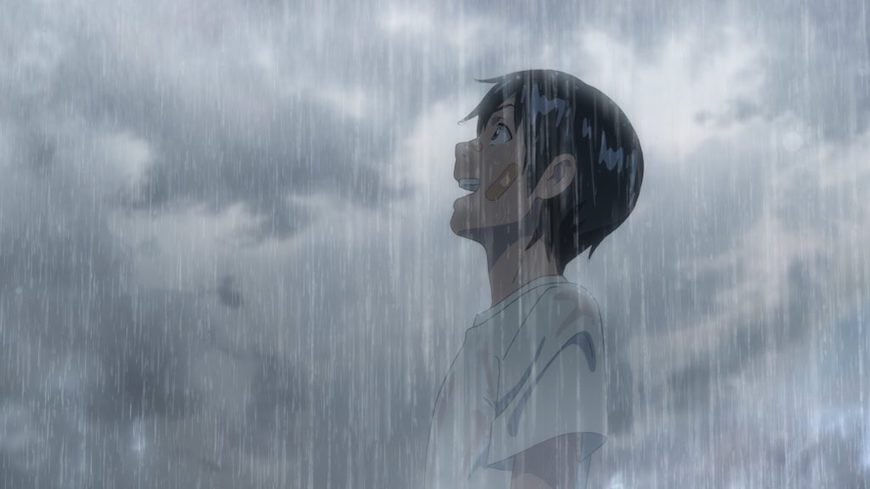 Do you think it’s fair that people call Shinkai the next Miyazaki?
DJ: I don’t really like to participate in the “next Miyazaki” debates, since it’s clear that Miyazaki will always be Miyazaki — especially now that he is making yet another film. He is a singular creator. But I think what the debates often try to get at is who will be the next Japanese animation storyteller that really breaks out internationally, and becomes a household name. The commercial success of Your Name and Weathering With You in Japan definitely place Makoto Shinkai in a rare position.

Whereas Miyazaki often makes films that feel timeless in their approach to human nature, I think Shinkai is making films very much for the here and now, and filtering these contemporary feelings through a similarly beautiful and advanced artistic style. Both approaches are important, to help us better understand ourselves through cinema.

And both are very popular among global audiences; Japanese anime is booming, largely thanks to overseas growth. What do you think is spurring this rising interest?
DJ: For 30+ years I think anime has had a really clear advantage in terms of a sort of undefinable “cool” visual appeal, that has helped Japan’s animation output stand out clearly from other international productions when they get imported to America.

With Japanese animation, there is at least a predetermined fanbase that says “I like anime,” and you show them a trailer for an upcoming film, and a certain number will say “I’m in, this looks great” without having to be pitched much harder. That’s a big advantage. It doesn’t remove a lot of the other work we still have to do to successfully release and market films, but it’s great to have that head start. And I think a lot of that is because of the cultural cache that anime has built over the last few decades.

Specifically in the last few years, how has interest in the anime films GKIDS distributes changed?
DJ: I am not sure that the actual fandom has actually changed all that much, to be honest. We have steadily grown our social media audience, and each year the box office for our films is rising, so we are happy to have more success, even if I think the quality of the films has always been excellent. 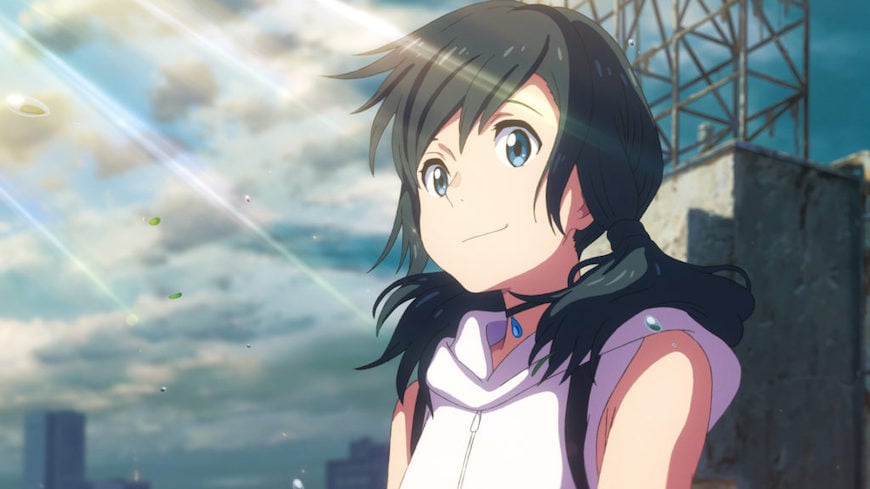 The amount of attention anime fans receive now from the film industry has definitely changed, in terms of movie theatres, streaming platforms, big retail stores — all realizing there is thing called “anime” that seems to be a very reliably selling, popular movie even as they see deteriorating sales in all other categories. That’s because anime fans support what they love. So we are seeing more attention being paid and with that comes more opportunity, which is great… it’s gratifying to see us start to win an argument we have been having for years.

A lot of that is coming from a handful of breakthroughs. The box office performance of Dragon Ball Z Super Broly was incredibly helpful, as was the success of Your Name. We are looking to capitalize on that and grow that with Makoto Shinkai’s next film, Weathering With You. The Studio Ghibli DVD sales are continuing indefinitely. Anime convention growth is huge year-on-year… it’s just becoming impossible to ignore.

It certainly is hard to miss. Looking ahead, how do you think the anime industry will evolve in the next decade?
DJ: Right now we are seeing a shortage of animators, following a major production crunch as all of these new platforms and studios are financing so many new series and features. It’s hard to get new features into production unless you have your own studio, but I think that will change as the industry adapts over the next few years. It used to be that anime was hugely driven by the local domestic business and then international was a small additional component to revenue and sales.

I think as the domestic market continues to shrink year by year, more and more business on these films and series will come internationally and we will start to see more collaborations between Japanese studios and international investors, telling new kinds of stories to appeal to this changing market. The overall story is one of growth and excitement, so I think it’s the perfect time to be an anime fan — you are going to be spoiled by all the choices available.