Top Animation News is a weekly column that rounds up the biggest, best and breaking stories from the animation industry. This edition covers January 24 to 31, 2020. END_OF_DOCUMENT_TOKEN_TO_BE_REPLACED

Creating the Fuddles and Puddles Book Trailer in Harmony

Following my third year at CalArts in 1981, I began a training program at the Disney Studio led by Eric Larson, the last of Walt Disney's famed "nine old men" then still working there. Over the years I went on to work at numerous studios, storyboarding and/or animating. My credits include "Who Framed Roger Rabbit?" "The Road To El Dorado," "Curious George," "Cats Don't Dance," "The Princess And The Frog," and "Frozen."

Like everyone else in the animation industry, I adapted to working digitally. This didn't come easily to me. But to my surprise, over time I came to love drawing on the screen. Today I do almost everything with a stylus, including animating. But my introduction to the digital age actually wasn't from animation, but from publishing. The transition began as I started creating my own projects, seeking greater creative control.

I took classes in Photoshop to learn digital painting, and I also gathered tips from background painters and art directors. At Disney we used Toon Boom Harmony on "Princess And The Frog," and I learned the basics of the software. Working on "Paperman" (the 2013 Oscar-winning black and white short) opened my eyes to the wonders of combining traditional animation with computer technology. I did some digital test scenes, replicating my traditional animation process.

My fourth book, Fuddles and Puddles, was published in September 2016. I had made book trailers for my previous picture books, Fuddles, and A Very Fuddles Christmas, by animating traditionally on paper, using Dan Larson's services to scan and paint the drawings. I bought Harmony for my freelance animation jobs, (I also use Storyboard Pro extensively). I decided to test myself to produce something entirely digitally.

By nature, I am an intuitive animator. I plan scenes with thumbnail sketches, analyzing the content, etc. But I never liked noting and timing every movement on the X-sheet, preferring to discover things during the animation process. This method is counter to CG methodology, but it's perfectly suited for digital 2D animation. The immediacy of quickly scribbling drawings, adding/deleting drawings, and changing timing, adds an editing phase that never existed before, allowing the animator to experiment without wasting much time. 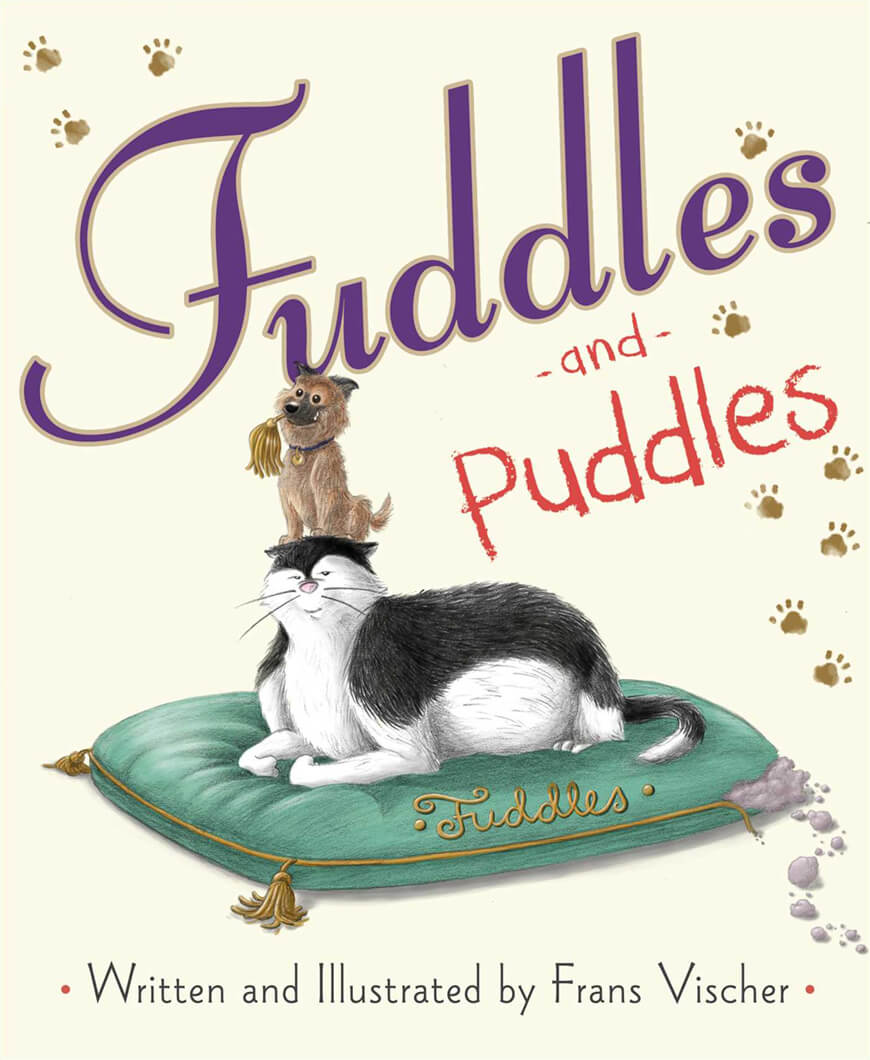 The book cover became my layout, and in Photoshop I separated the elements to be animated, (Fuddles' head and body, pillow, tassel, etc.) and imported them into Harmony. Then I blocked out the scene with rough poses (I was quite busy, so using my time wisely was important). I created a run-cycle with the puppy, making loose, sketchy drawings. When I was happy with the movement and timing, I started a new column in the X-sheet, and using the rough drawings for a guide with the Onion-Skin tool in Harmony, I made new refined drawings. The cat and dog fur allowed me to draw sketchy style outlines.

I copied and pasted the tied-down the drawings of Puddles the puppy, placing them across the screen so the puppy ran behind Fuddles. In another layer I flopped those drawings, slightly enlarged, so the puppy crossed the screen in the opposite direction in front of Fuddles. On yet another layer, I added new animation to bridge the two layers, completing the circle so the dog ran around Fuddles.

I kept Fuddle's actions simple, mainly reacting to the puppy's actions. The position of his body is mostly held as seen below.

I also experimented with animating the pillow. I wanted a dent to appear as the puppy jumped on it. Working traditionally, I would have to redraw the pillow repeatedly. Instead I used Photoshop. I selected the affected portion of the pillow using the lasso tool, and with the warp tool I nudged the pillow downward, eyeballing the contact point. I made 5 jpegs of the pillow successively squashing down, and imported them into Harmony.

I decided late in the process to add the puppy dropping the tassel. I quickly roughed out the action in a new column. Once I was happy with the motion and timing, I redrew everything on the puppy layer (again using the Onion Skin tool), and then deleted the rough drawings. This perfectly illustrates the benefits of animating in Harmony. An idea presents itself, and I spontaneously work it into the existing scene. A new scene version can be saved, so the original file remains intact. If the new version doesn't pan out, I return to the previous version. Scribbling digitally is much quicker than posing and timing in CG, and I wish the animation industry would embrace this more.

With the animation completed, I added color, mostly by hand, as the outlines were too sketchy for Auto Fill. I copied and pasted, adding and erasing as needed, which saved time. While composer Steve Morrell scored the wonderful music, I searched the web for puppy sounds. With help from animation colleague Todd Jacobson, I transferred a YouTube video into an MP3 file, and imported that into Audacity, a free-download audio editor. After isolating numerous yips and growls into individual files, I imported them into Harmony, along with Steve's music file.

From there, it was great fun moving the sound effects into places where they best fit the action and complemented the music. I love the scrolling tool in Harmony, and the ease of turning sound files off and on gives great flexibility. With the addition of music and sounds my book trailer was done!

See the Fuddles and Puddles book trailer here on YouTube

More information about the author can be found at www.fransvischer.com and at www.pamperedfatcat.wordpress.com