Mixtape Club does legendary animation for The Unicorn Rescue Society 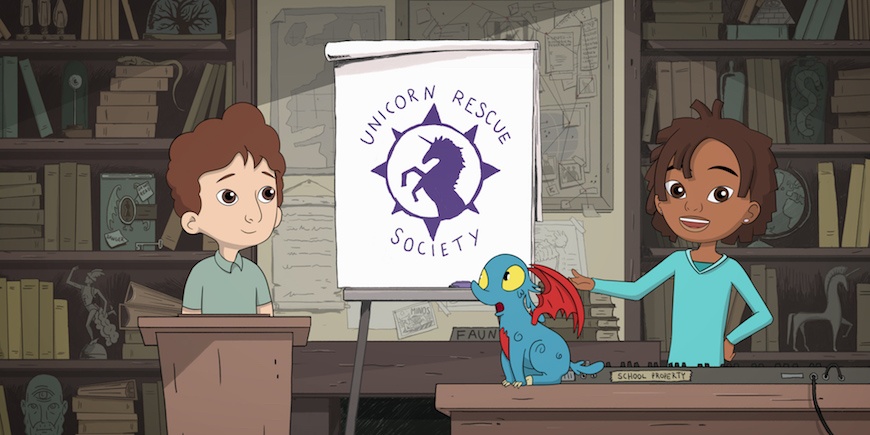 The plight of endangered species is well-documented. Groups like the World Wildlife Fund exist to protect them against threats like poaching, environmental degradation and habitat destruction. Now, imagine if those animals just happened to be fantastical creatures like dragons, sasquatches and maybe even unicorns — who looks after the living legends?

That’s where The Unicorn Rescue Society (URS) comes in. The secret organization is the only hope for myths and monsters, and is the star of a new children’s book series from Newbery Honor-winning author Adam Gidwitz and Mixtape Club co-founders Jesse Casey and Chris Lenox Smith.

Mixtape Club is a New York City-based creative production company specializing in content creation and advertising. The full-service studio started a new chapter in its offerings with this project, helping develop The Unicorn Rescue Society from end-to-end. It wanted to promote the book series without necessarily copying scenes directly from the texts so it created a YouTube vlog-style trailer featuring the lead characters — and it produced it in Toon Boom Harmony.

Having only a few months before the first book’s launch, using Harmony helped Mixtape Club produce The Unicorn Rescue Society trailer on-time and on-budget. The results are fables made fabulous. The studio will also continue to use the leading 2D animation software for future shorts on the project.

Toon Boom spoke to Mixtape Club co-founder and URS director Chris Lenox Smith and technical director and lead animator Frank Suarez about their experience working with Harmony, how it brought lore to life and what’s next for the studio.

Hi Frank and Chris! Was this your first production using Toon Boom software?

CLS: This was Mixtape Club’s first official production using Toon Boom [Harmony]. We loved it! It took a beat for our team to transpose their knowledge from other software over, but even in the first week we all knew it was the right decision.

Why did you decide to use Toon Boom Harmony to animate The Unicorn Rescue Society trailer?

FS: Our intention with the URS promo animation is that this will be the first of many spots, or potentially a series, that Mixtape Club will produce. To that end, we feel Harmony has an advantage over competing software with its superior drawing tools, node-based workflow and its library system for creating reusable assets and animations.

Did you storyboard The Unicorn Rescue Society in Storyboard Pro?

CLS: We didn’t use Storyboard Pro for URS only because the storyboarding process had started well before the decision to use Toon Boom [software] came about, but we’re excited to try it for future instalments of the series.

How many animators worked on The Unicorn Rescue Society?

CLS: We had five in-house animators, four of whom are very talented hand-drawn animators but have little to no experience with Harmony. Having a tight deadline to get this promotional spot out ahead of the book, our [technical director] trained our animators simultaneously as they worked on their shots, doling out instructions on a ‘when it’s important to know this’ basis! In the end, they were pros and handled the software with competence.

What Harmony features made production more efficient and enjoyable?

FS: One thing I like is the nonlinear and modular way you can produce an animation. For The Unicorn Rescue Society, we created our head rigs using deformers while the bodies were hand drawn with frame-by-frame animation. We were able to simultaneously animate a character’s head rig onto the rough body animation while its lip sync, ink and paint were being done by the other animators. We used the node editor and library to easily update the character animation as each task was completed.

I also appreciate the way you can change a character’s line weight after it’s been cleaned up as well as the ability to create multiple palettes for characters and change their colours on the fly. Did I mention write nodes? Those are cool — big fan!

Did you ever use the Toon Boom Learn Portal for added animation knowledge or skills, or just a quick brush up, when producing URS?

FS: We used the Toon Boom Learn Portal to brush up on some basic features as well as learning about the pose copier and master controllers.

How many URS shorts do you have planned or in production?

CLS: We have a growing backlog of shorts we’re hoping to produce on an ongoing basis. At minimum, we plan to create one for each book launch and hope to do more in between.

Do you have any other current or upcoming projects you are using Toon Boom software for that you can tell us about?

CLS: Not at the moment, but we are actively looking for opportunities now that we have this example piece under our belt.

Are you working on your first Toon Boom Harmony production? Let us know about it in the comments below!