When Quinn Taketa began sharing her thesis film Part of Your World on social media, she didn’t expect it to go viral. Within a few days, the short film has garnered over 78k views on Twitter, and gained acclaim on LinkedIn and NewGrounds as well. Taketa is an American animator currently living in Vancouver. She has seven years of experience as a freelance illustrator, and is a recent graduate of the Vancouver Film School's Classical Animation Program. Part of Your World is a... END_OF_DOCUMENT_TOKEN_TO_BE_REPLACED

Our new Storyboard Pro Fundamentals course is intended for artists who are interested in learning digital boarding workflows in Storyboard Pro in order to get the most out of their time on productions. Through the new remote training program, participants learn how to plan and construct storyboards and animatics using the latest techniques available in Storyboard Pro.

In order to prepare participants for the work required at studios, we brought Mike Morris on board to consult on the program and prepare assets for students to learn from. Mike is best known for his career storyboarding for TV animation. We interviewed Mike Morris to discuss the craft that goes into storyboarding and the Race Around The Moon animatic that he developed for our new remote training course. You can find the full 4-minute animatic and our interview below.

How would you describe the creative brief for the Race Around the Moon animatic, and how did this project compare in scope and complexity to other productions you have worked on?

The creative brief was really open, which was nice. Marie-Ève Chartrand — Toon Boom's Director of Customer Success — was essentially my producer for this venture. She left the book fairly open for me, and told me to make something that we could use to illustrate different points that we go over in the training.

I was given a blank slate, and it was really great to have that creative freedom. Usually you're handed a script, and that is what you do, you're trying to make sure that your work matches the director's vision as much as possible. In this case, being board artist, director and writer, I was encouraged to go bonkers with it.

In scope, I would say this was fairly similar to TV production. I tried to give it fairly high production values, just because I want to make sure that everything people see is clear. In a TV board, you can get away with rougher drawings than what we ended up with.

We also used a number of 3D assets, and in one situation a 3D background in its entirety. I learned how to 3D model for this project, and that was a really cool experience.

Can you tell our readers why storyboard art can be rougher in productions?

In a normal television production, shorthand is necessary, often because deadlines are tight. Some drawings stay rough all the way to the very end. Though that happens less often in some productions, others tend to roll with it.

In this project, we had the opportunity to clean it up nicely and make it visually appealing. Mainly it was for clarity. When you're going through a training course, participants need to understand what is going on and who each character is. We tried to make the boards as communicative as possible. 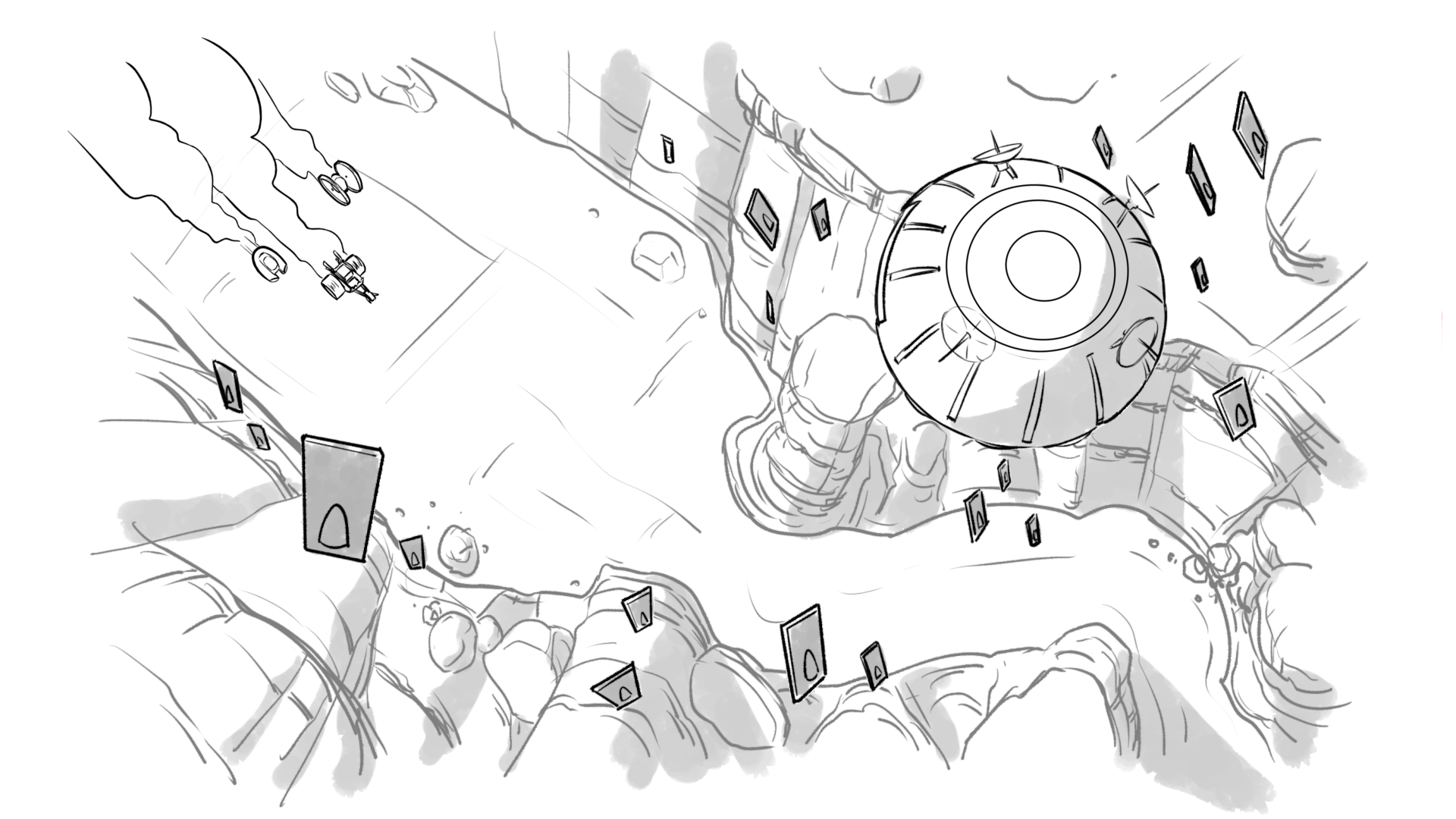 Panel from the Race Around The Moon animatic used in the Storyboard Pro Fundamentals course.

What does an average day look like for a story artist working in TV animation?

Generally there's a handout. You'll meet with the director and get your section of an episode and then they'll sit with you and say, "This is what we're thinking about. These are my thoughts about this." They may have very specific ideas as to what should happen in certain scenes, or they might say, "Go do your thumbnails, come back, and we'll review."

You figure out how you want to compose your shots. You need to have a good understanding of what shot does, what it means, and when to use a Close Up versus a Long Shot and why those should be used in a given situation.

A project starts with a 'figuring out' process, then as you go further along it becomes more and more iterative. There are changes and fixes, boarding and reboarding.

Of the productions I've worked on, each of them had a different process. The Simpsons had story artists put together and present story reels on their own. Future Worm was similar — you do your boards, then a rough timing, and that timing would inform the editor. On DuckTales, board artists did no timing whatsoever, we just focused on the drawings — the timing was the purview of the director and the editor.

Which panel or scene in this animatic was the most challenging to work with? How did you approach it?

The most challenging scene was probably the race through the jungle. That was most technically challenging for me, because it required all 3D assets in the entire shot, and I needed to get those in a place where it felt natural.

I had to figure out how to weave all of the branches that they're driving on in, and give each character a moment to shine — where they're closest to the camera, featured individually.

I worked out on paper where the branches would twist, where to put rocks, branches and fallen logs to make the racetrack look like it wasn't suspended in midair. I wanted it to look like a natural surface that could be driven upon. There was a logistical challenge to making that work.

What was your process for the character designs?

The first character that I designed for this project was Gnash Calloway, who was the grungy biker-looking construction truck driver. I think the second one was Minki Golden.

I play a lot of Dungeons & Dragons, so the characters were somewhat inspired by those fantasy archetypes. In my first drafts, Minki was a half-orc, and Gnash was a goblin-kinda guy. For Slowala, I just thought that a half-sloth half-koala beastman was a fun idea to have as a speedster.

The cars are also influenced by the characters. In the backstory, Minki's the heiress of a mining fortune and her equipment is really sleek and fancy, but she just goes for it on the racetrack, whereas Gnash essentially cobbled his car together from junk, and Slowala is just a tech genius so you get the feeling that his car is a custom job that he built on his own.

Giving those characters each a different way of operating and a different style of driving was also important. Gnash Calloway is more of a dirty driver — he doesn't mind sabotaging his competition, while Minki is all about the skill of driving, and Slowala attempts to overcome obstacles through technology.

Watching the animatic, eventually you just realize they are all kids playing in a backyard. Sorry about the spoiler! I wanted something that could be universally appealing, something that everyone could get behind and relate to in some way — and I thought it was fun to set their race in an alien landscape.

What kinds of productions do you enjoy working on most?

My favourite projects to work on are action-adventure comedies. That's what I like the most.

Having been inspired, as a kid, by films like Indiana Jones, the Superman movies, and The Goonies... those action-adventure films work by weaving comedy through the film. You have moments of high tension, but then cut those moments with great comedic timing. That's the stuff I really love.

I feel it's a great rollercoaster for building tension in an audience, and then getting little comedic releases to temper that so you don't just drive somebody nuts. It's all about making the audience feel like they're participating in something even though they're sitting in their living room. 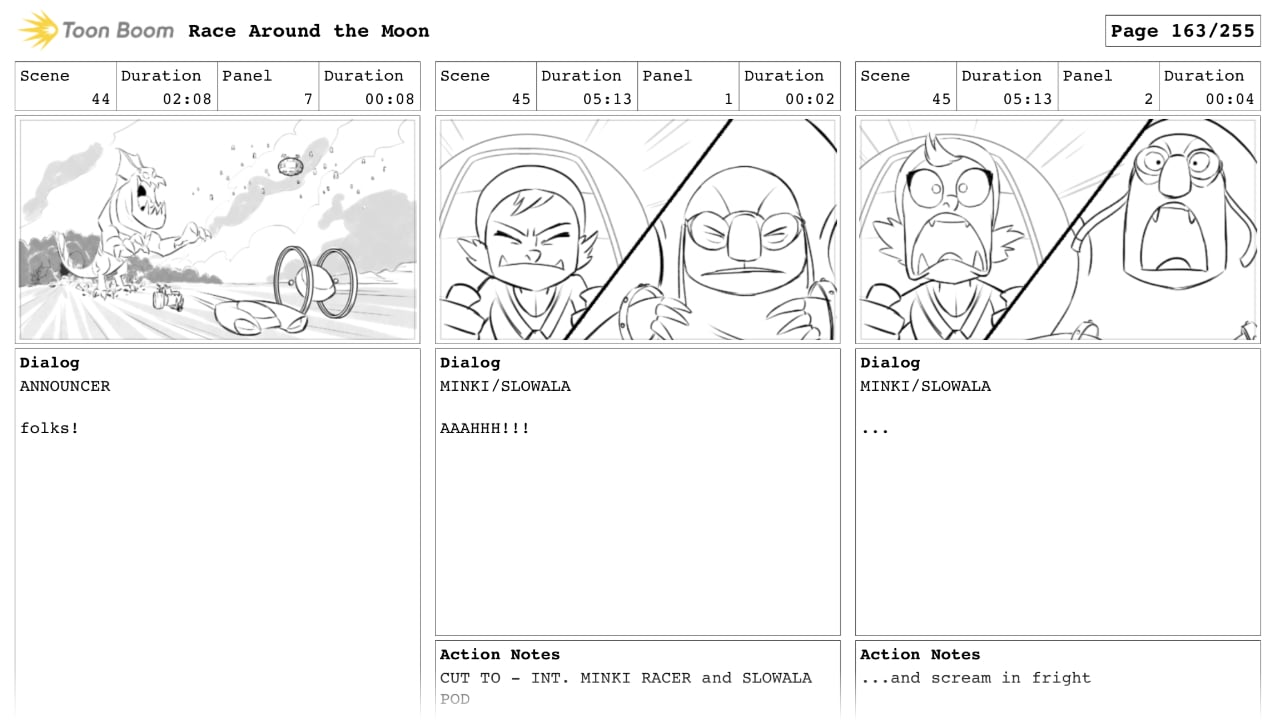 Selected storyboard panels from the Race Around The Moon.

As a director and storyboard revisionist, what advice would you give to a student who is interested in pursuing a career in TV animation?

As a story artist, you have to be a director, cinematographer and actor, all-in-one. You need to build an understanding of how and when to vary different kinds of shots. When you are storyboarding, you shouldn't just switch between two shots, you need to learn when to use a wide shot and when to use a medium shot. You need to communicate in a way that means something through the language of filmmaking.

It's a good idea to not only study from cinematic sources, but also do you own studies of photography and life drawing. When you are life drawing, try not to stick to the same point of view. Try out drawing from different places in the room.

For example, if you're figure drawing in a room, try sitting on the floor or try to elevate yourself. Sitting on the floor, you can practice up shots, while standing on your chair gets you a down shot. Generally when you're in a life drawing class the model will play towards the front of the stage. I like to draw from the side, where you often get a more interesting point of view. Figuring out how to draw different shots is important.

Is there a feature in Storyboard Pro that you wish more storyboard artists were aware of?

Reveal from the Race Around The Moon Animatic.

Was there anything that we didn’t ask about that you would like to mention to our readers?

Craft is important. It's really easy to get complacent and think, "Yeah, I got this now." Always try to innovate, always try to look to the next thing.

Balance is also important. You can't be constantly working or else you won't have time for life experience, and without life experience you won't have anything to draw from when it's time to get work done. Especially in animation, when you're trying to bring so much of yourself into your work — those really genuine experiences. It's important to have things that you've done, places you've been, and life that you've lived. You don't want to just have carbon copies of work that already exists.

We're doing this interview in the time of quarantine, so my last piece of advice is to stay motivated as best you can.

Want to learn more about the craft of Storyboarding? Register today for our Storyboard Pro Fundamentals remote training sessions. You can also find more of Mike Morris’ work on Facebook.